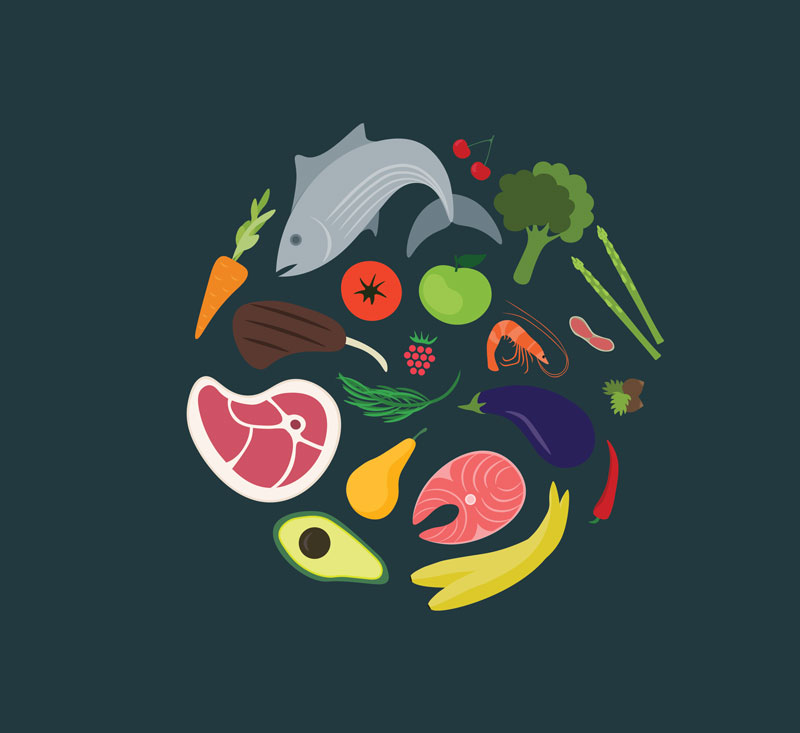 Does My Child Have Food Allergies?
5 Steps to Heal Your Gut
10 Steps to a Healthier and Youthful Brain

Many years ago, I embarked on an autoimmune Paleo diet (AIP) to see if it would help calm my immune system. The results, at first, were remarkable. I lost weight, gained energy and felt better than I had in years. Like others following this diet I included lots of vegetables; poultry, fish and lean meats; low glycemic fruits and lots of fermented foods such as kombucha tea, coconut yogurt, pickles and sauerkraut. After 12 weeks on the diet, I slowly tried to reintroduce foods carefully, one at a time. Nothing seemed to work. Every nut, seed, bean and gluten-free grain was a disaster. I found myself congested, itchy, covered in hives and inflamed. The worst offender was the day I reintroduced tomato. I had always loved tomatoes and had previously used them all the time in cooking. I decided to make a homemade tomato soup. I took fresh tomatoes and cooked them down with some onion, garlic, fresh basil and oregano. Given how poorly my reintroductions had gone thus far I ate just two bites of the soup as my introduction. Within 20 minutes I was covered in hives, itchy, and having severe diarrhea. How could this be? I certainly could not have developed an allergy to tomatoes in a short 12-week period? While it would take me some time to figure out, the common denominator in my failed introductions was dietary histamine.

Histamine
Most of us only think of histamine when thinking of allergies. However, its functions in the body are both numerous and far reaching as it is one of our neurotransmitters (brain chemicals). Histamine is released in the body when mast cells degranulate and may be received by one of four receptors (H1R-H4R). Of these receptors, we primarily understand the H1R (found throughout the body in smooth muscle, vascular endothelial cells, heart and central nervous system) and the H2R (triggers gastric secretion of histamine to regulate HCL production). Typical allergy medications such as Benadryl, Allegra, Claritin and Zyrtec are H1 antagonists, meaning that they block the effects of histamine at the receptor site. H2 blockers are medications such as Zantac and Pepcid traditionally prescribed for those with acid reflux. H2 blockers actually target histamine receptors in the gut that release acid. Both of these types of medications do not change actual levels of histamine, but rather stop the histamine from triggering the receptor site which alleviates symptoms of allergies.

Elevated histamine levels can be found in individuals with histamine intolerance (HIT) and mast cell activation disorders (MCAD). HIT may occur when there are single nucleotide polymorphisms (SNPs, sometimes referred to as genetic mutations) to the enzymes diamine oxidase (DAO) and amiloride binding protein 1 (ABP1). Symptoms may include gastrointestinal complaints, migraines, fatigue, dizziness, runny nose, flushing, asthma and hives. Interestingly, elevated histamine levels also inhibit DAO causing worsening of the histamine intolerance. More severe histamine issues occur with MCAD which is a group of disorders including systemic mastocytosis (SM) where there are increased numbers of mast cells and mast cell activation syndrome (MCAS) where there are normal numbers of mast cells that degranulate frequently. MCAD symptoms will generally be much more severe than HIT and will have symptoms including gastrointestinal complaints, headaches, fatigue, vertigo, flushing, hives, asthma, hypotensive syncope, brain fog, tachycardia and anaphylaxis.

Elevation of histamine will also cause various complaints related to its role as a neurotransmitter. It works to control the sleep-wake cycle and therefore is highly associated with insomnia. It may decrease GABA levels and increase norepinephrine and epinephrine levels causing anxiety (often severe for those with MCAD). It may cause increased permeability of the blood-brain barrier allowing toxins to cross into the brain. Histamine greatly impacts neuroendocrine control including behavioral state, biological rhythms, body weight, energy metabolism, thermoregulation, fluid balance, stress and reproduction. Hypothyroidism may occur with elevated histamine as it may decrease thyroid releasing hormone leading to decreased levels of TSH, T4 and T3. Brain inflammation can cause neurocognitive issues for patients with chronically elevated histamine.

Appropriate methylation is also essential for proper histamine catabolism. Histamine N-methyltransferase (HNMT) is an enzyme required for breakdown of histamine in the extracellular pathway. Any enzyme that has the name “methyltransferase” requires a methyl donor to function. In this way, decreased methylation may also cause increased histamine levels. Further, presence of a virus may also inhibit this enzyme. This is the reason why individuals may see increased allergies and/or asthma when they have a virus such as the common cold.

AIP and Histamine
So why is the AIP diet such a problem for those that are histamine sensitive? Well, first of all, it doesn’t have to be. There are several reasons AIP is often high in histamine. First, this is a diet that stresses the use of fermented foods. Since ferments are quite high in histamine this can certainly contribute to total histamine levels. The other reason AIP can be so high in histamine is the emphasis on animal protein. While fresh meats and fish are not super high in histamine, as they age histamine develops. This is because all animal proteins contain the amino acid histidine. Histidine, as the animal protein ages, will then degrade to histamine. The older the meat the higher the histamine content. This brings me to the next reason AIP tends to be higher in histamine—the emphasis on whole foods typically means longer hours in the kitchen. Since most of us are so busy with work, family and other responsibilities cooking is not something we typically make time for in our lives. So, to accommodate a lifestyle that requires more homecooked meals, many (myself included) will batch cook meals enjoying leftovers all week long. While this is not a problem if you do not have HIT, for those that do this is a recipe for a histamine disaster. Finally, we live in a world were bigger is better. While traditionally fermented foods are used in small amounts as flavoring agents, many will indulge in much larger servings. A tablespoon of sauerkraut is not typically a problem, but a whole cup may be problematic.

Low Histamine Diet
High histamine foods include alcohol, fermented foods, mature cheeses, smoked foods, shellfish, nuts, chocolate, vinegar, wheat, tomatoes and citrus fruits (lemon, lime, orange, tangerine, grapefruit and pineapple). These foods may exacerbate HIT. Prepared, boxed and canned foods are also often problematic, as can be older meats that have been aged or have been sitting in the refrigerator for a few days and ground meats. Poultry skin is also high in histamine, even when fresh. Black, white and green tea, coffee and other caffeinated beverages can also be a problem. While typically, the occasional high histamine food is not overly problematic, eating lots of high histamine foods over the course of a day or two can be very problematic for those with HIT. The best course of action is minimizing the use of high histamine foods if you are histamine intolerant. Eating a vegetarian meal or two per day can be an easy way to decrease your histamine load. Try preparing meats fresh every day. When consuming higher histamine foods consider keeping portion sizes small. For example, the amount of lemon typically found in hummus is likely not a problem. However, drinking a glass of fresh squeezed lemonade could be more of an issue.

Supplements for Histamine Intolerance
There are several supplements that can be helpful for histamine intolerance and allergies in general. In my practice, I have found that individuals have their own unique needs for allergy and histamine support. It may take one or more different supplements before you find your own unique combination that helps. While certainly not an exhaustive list by any means, here are some of the supplements that I have found to be helpful.

Jessica Pizano is the owner of Fit to You, LLC, which offers clinical nutrition and nutrigenomic counseling, as well as personalized training programs. Her concentrations include genetics and nutrigenomics, general health and fitness, weight loss, food allergies/sensitivities, autoimmune disease, obesity intervention, and Pilates. She earned a master’s degree in human nutrition at the University of Bridgeport. She is a certified nutrition specialist through the Board for Certified Nutrition Specialists. She is continuing her studies at Maryland University of Integrative Health where she is pursuing a doctor of clinical nutrition and is also an adjunct faculty member teaching nutritional genomics. Currently, Jessica practices nutrition counseling, nutrigenomics, and personal training in her studio in Avon. She may be contacted at (860) 321-7234 or online at: www.fittoyouct.com.