Food: You Are What You Eat 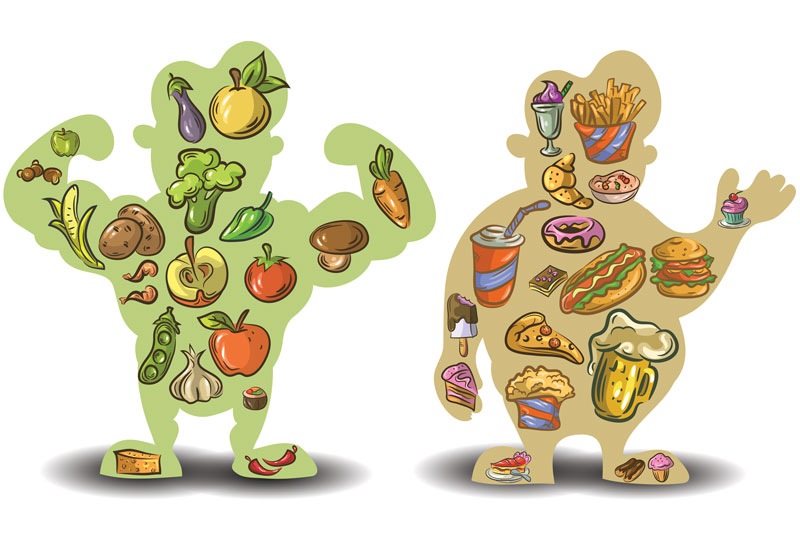 Food is the ONE thing that people dose themselves with every single day. Food provides comfort and nourishment. It is engrained in casual social events, cultural practices, and religious customs. We need it. We crave it. We take pictures of it and “share” it for our friends to envy.

The digestive tract is a complex network of nerves, organs, microbes, and receptors stretching over 27 feet from beginning to end. To simplify a very complex process, when a person takes a bite of a meal enzymes in the mouth, and the act of chewing, immediately begin the chemical and mechanical work of breaking down food into smaller molecules to eventually be absorbed. Once the food passes through the stomach, more digestive enzymes continue the breakdown process while destroying potentially harmful bacteria that may have been ingested with the meal. The food then travels to the small intestines, where the bulk of nutrient absorption begins. In the large intestines, water is absorbed, and waste products are packaged for elimination. As the food travels from the mouth through the stomach and intestines, enzymes are released, immune cells are alerted, bacteria are fed and molecules are absorbed. Vitamins, chemicals, and nutrients are taken into the blood stream. Some of these have an immediate effect on the body (think caffeine) and some pass through, are taken up without noticeable consequence, and are stored for times of need (for example, Vitamin B12).

Multitudes of beneficial bacteria within the gut communicate chemically with the intestinal lining, influencing and sometimes alerting the organ’s immune surveillance system. The food a person eats, chemicals and medications to which they are exposed, and the lifestyle they lead heavily influence which bacteria thrive, and which are kept in check. It is well known that excess growth of less favorable bacteria can contribute to obesity, anxiety, and auto-immune disease (VERY good reasons to keep a healthy microbiome!).

Immune tissue within the intestinal walls detect pathogens (harmful bacteria) and toxins, and can trigger both local and systemic responses to perceived threats. Every bite of food ingested has chemical components that interact with the receptors for both the nervous and immune systems that line a person’s digestive tract. It should be no surprise, then, that food is often the fuel to the fire of illness for patients. Food reactions can worsen auto-immune illness, change behaviors and mood, cause physical discomfort, and wreak havoc on a patient’s general health. A significant focus of Naturopathic care is on tailoring the diet to maximize nutrients and minimize the food reactions that can contribute to a patient’s illnesses.

What nourishes one person may be very offensive to another. There is no single answer to food sensitivity, and every person is unique in their reactions. Finding out which foods are triggering a person’s symptoms can be tricky, but identifying these is key to long-term healing and wellness.

People often mention their food “allergies” when discussing their health. To clarify, a food allergy is a reaction in which a food protein creates a specific immune response. In these reactions, a certain group of cells, known as Immunoglobulin E (also called IgE), trigger a cascade of full-body responses that range from minor to life-threatening. Gastrointestinal distress, skin reactions, respiratory effects, and even anaphylaxis (a sometimes fatal, whole-body reaction) can result. These reactions can become more severe each time the patient is exposed, and early identification is important. Fortunately, these immune-mediated food allergies affect only a small portion of the population.

Celiac Disease is an immune reaction to gluten, a protein found in wheat, barley, and rye. Although Celiac Disease has a different immune cell (Immunoglobulin A, or IgA) responsible for its effects, it is also considered a true food allergy. Patients with Celiac disease will need to absolutely eliminate gluten from their diet and personal hygiene products – a very difficult task indeed. Ingestion of gluten for those with Celiac will not only result in feeling poorly, but will cause structural changes to the tissues of the intestines and can eventually impact nutrient absorption.

Food sensitivity, or intolerance, is a more generalized term, in which the offending food triggers either an immune response controlled by other immune-modulating cells, or by processes that are not immune-mediated. Chemicals in foods, such as histamines, salicylates, colorings, preservatives, and sweeteners can initiate food reactions with physical (and, sometimes, emotional) symptoms as a result. Symptoms of food sensitivities can range from minor to significant, and for some patients can be debilitating.

The Effects of Food Sensitivities

Intolerance to a food group can come from a lack of enzyme needed to digest the food, or a reaction to the components of the food itself. In both lactose and fructose intolerance, the enzyme required to break down the food components are lacking or absent. This can result in discomfort, bowel changes, gas and bloating for those affected. Other food reactions can result in more systemic effects. Food sensitivities can result in symptoms that include, but are certainly not limited to, vague joint pain, skin rashes, amplification of auto-immune illnesses, behavioral changes, migraines, and chronic sinus issues. Some food sensitivities can have a familial link, and some are unique to the patient alone.

The tissue lining the intestines is, ideally, a healthy layer of cells that are joined tightly together. This barrier allows only beneficial nutrients to be passed through using a series of transporters and nutrient-specific signals. In a “leaky gut” state, inflammatory processes are triggered by foods and ingested chemicals. These otherwise impermeable cell connections, called “tight junctions”, become impaired and begin to gap. This gapping allows foreign proteins to enter the circulation, inciting an immune response. Additionally, bacteria that are ideally confined to the intestinal tract are allowed to exit into the circulation when these tissues are impaired. The resulting immune responses can have systemic effects. Auto-immune illnesses, psychiatric symptoms, sleep issues, allergies, and even cardiovascular problems may arise from the “leaky” gut.

For food allergies, testing through a traditional lab with a blood draw can identify offending foods. “Skin prick” tests are frequently done at an allergist’s office, small amounts of proteins from common food allergens are injected under the skin using small needles. Those foods inciting an immune reaction are easily identified by the resulting skin response.

Gluten allergies in Celiac disease can be identified by tissue changes noted on biopsy during endoscopic procedures, or with laboratory testing for the immune cells responsible for these changes. In order to have accurate results, the patient must have eaten gluten within several weeks’ time. Recently, testing for the genetic variations that code for Celiac disease has been used as well.

Testing for food sensitivities varies, and preferred methods often depend upon the practitioner and patient’s preference. A diet and symptom diary can be a wonderful tool for a physician and patient team to help uncover which foods may be triggering issues. Typically, a journal of all foods (and beverages) ingested for a full week, as well as a list of physical and emotional symptoms occurring during that time can help zero in on a few foods that may need to be eliminated. Some of the most common food sensitivities include dairy products, eggs, wheat, soy, and corn. Depending upon genetic variations, some patients also have reactions with foods containing certain amino acids (for example, tyramine or glutamates) or organic compounds (such as catechols, found in potatoes, tomatoes, and some tea).

When routine investigation of diet and symptoms fails to identify offending foods, further laboratory testing can be done. Food sensitivity panels are available using a small blood sample from the patient. These tests are typically performed by specialty laboratory companies, and can check quantities of IgG, IgA, and IgE present against different food proteins. The benefit of these tests is that foods that may not otherwise be suspected can be flagged as a possible issue for the patient. For example, a patient with a chronic skin rash and migraines might find that mushrooms and brewer’s yeast are making symptoms flare. The results of the test can give the physician a good idea of which foods to begin eliminating in order to start a patient on their path to healing.

Hydrogen breath tests can identify lactose, sorbitol and fructose malabsorption, as well as bacterial imbalances in the intestines. These are becoming more widely available at clinics and private practices.

Another option for identifying food triggers is an “elimination diet”. Generally, this is an extended period of time during which a patient completely abstains from a particular food group. The elimination period can last weeks to months. This can be challenging, as it requires absolute attention to food labels to identify hidden ingredients, and planning for meals becomes essential. Although difficult, the elimination diet can be incredible in its ability to help a patient and physician identify not only the offending food, but the health challenges it causes, even subtle symptoms that may have been written off as “normal aging” or “just part of life” may become more obvious during these elimination periods. At the end of the elimination period, the food can be reintroduced and another food group can then be eliminated. This sequential rotation of eliminating foods allows the patient and practitioner to determine which foods are causing issues, and which are considered “safe”. Once identified, the offending foods can either be totally avoided or reintroduced in a pattern that allows for improved tolerance. For those patients who are unable to afford the cost of laboratory and specialty testing, this is a wonderful option.

Patients suffering from long-standing health issues, auto-immune disease, chronic pain and emotional symptoms should absolutely consider testing food sensitivities while working on their path to wellness. With multiple testing options available, it is not only easily accessible, but can be the key to long-term healing.