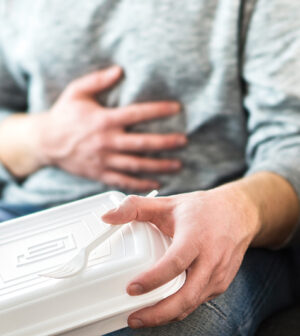 Your head is pounding, your brow is sweating, and the stabbing pain in your gut is the only thing that distracts you from the nausea. You run for the bathroom, you want to run to the hospital, but what can they do for you? It’s the middle of the night and you have food poisoning. Was it the fruit salad that cousin Mary brought or the macaroni salad that Aunt Anne made? Maybe the turkey wasn’t done enough? Just thinking about it makes it worse. Then, it gets worse. Your kids come rushing into your room holding their bellies. They have it too!! Now, what are you going to do?

According to the CDC, food poisoning strikes as many as 1 in 4 people every year. Most of these cases are not linked to major outbreaks and many happen around holiday time when food sits out for too long. There are bacteria in everything. The world is not sterile. The problem comes when the numbers of bad bacteria get so high that your defenses are overwhelmed. Bacterial populations can double every 20 minutes. If there are a mere 100 organisms in the macaroni salad when it is prepared, an hour later when it is brought to the party, there will be 800. As it sits on the counter awaiting the great feast, there will be 51,200 two hours later when you eat it. Your scoop will contain about 2000 at dinner. Then by 9 pm, that 2000 has turned into almost 10 million bacteria; all excreting toxins into your gut.

Don’t get lost in the numbers and don’t get consumed by worry. There is a way to do this safely and without antibiotics or hospital emergency rooms. There is a way to get those children feeling better and back to sleep in an hour. Vacationers bring it to South America. Explorers have packed it to the top of Mount Everest. This antidote has been shown to be lethal to Salmonella (yes even Typhoid), Staph., E. coli (yes even O157:H7), C. Sporogenes, H-Pylori and many more common pathogens that cause intestinal distress. Yet, even with this lethal effect on harmful bacteria, it is so benign to people that you can drink a pint of it and it won’t hurt you a bit. It’s even safe for kids.

By now you must be screaming, “What is it already!!??” The antidote you seek is an enhanced aqueous colloid of silver. Years of laboratory research on bacteria, fungus and virus in mice, rats and people have produced reams of research demonstrating the ability of this silver colloid preparation to safely reduce populations of germs by more than 1,000,000:1 in less than 20 minutes.

Not just any silver colloid will do this. Some preparations are too weak (less than 20 parts per million) and some are compounded with sugars, citrides or proteins to achieve ridiculously high concentrations like 250 or 500 parts per million (ppm). But these compounded colloids are far less bio-active. As it turns out, a strong colloid of 40 to 60ppm when mixed with a little surfactant like a food-grade polysorbate 20 and some peppermint oil, out-performs those other silver colloids by hundreds or thousands of times. That means killing more bacteria faster. And that is precisely what you want to do. You want to drink this enhanced aqueous colloid of silver as soon as you start to feel queezy.

One ounce, taken at the first signs of nausea, can stop food poisoning in its tracks in 30 minutes. If one waits until the symptoms are as bad as they can get, it may take a few hours and a few ounces to kill enough of the bacteria to end the situation. But even that is better than 2 to 3 days of diarrhea, vomiting and fever. If you treat the situation soon enough, there will be no vomiting, diarrhea and fever. That is precisely why Moms should have a bottle in their purse at all times. Everyone who eats should have a bottle in their home at all times. Vacationers should take several with them on every trip. You never know when it’s going to strike. Everyone that I have ever known who has used this antidote has never been without it ever again.

Steven Frank is an innovative herbalist for Nature’s Rite. His concoctions and decoctions have helped thousands achieve more comfortable healthier lives. Mr. Frank has spent more than a decade doing medical research and has numerous patents in the healthcare arena. His products and formulations can be seen at: www.MyNaturesRite.com.