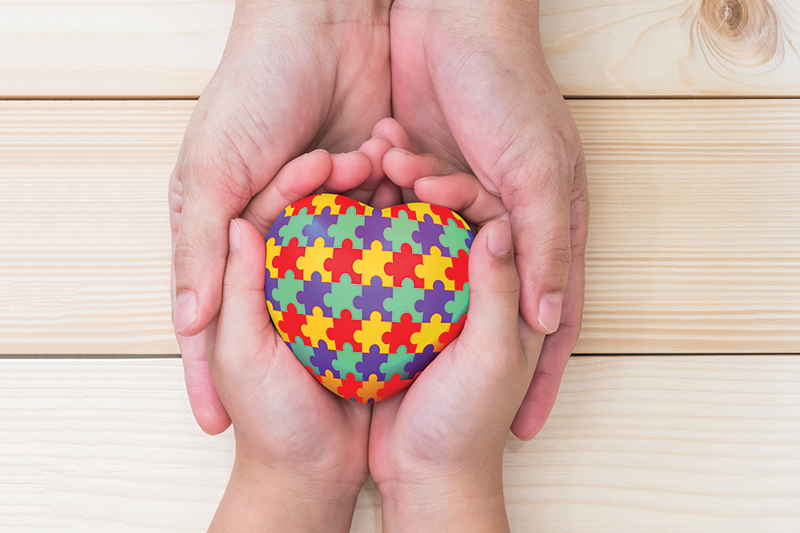 Meditation, Mindfulness and Yoga for Kids
No Medical Explanation for Your Pain?
Three Perspectives on Financial Independence

Autism is the fastest-growing medical condition in our children today. From the late 20th century to today, the rates increased EIGHT TIMES! According to data from the CDC, approximately 17% of children have a developmental disability. Therapies and treatments have improved to help these children speak, socialize, learn, and eventually recover. However, the most controversial part of autism isn’t the treatments—it’s the cause.

You may have seen ads on social media for class action lawsuits about acetaminophen causing autism. The first time I heard this, I thought it was impossible. After all, acetaminophen (brand named Tylenol, and called paracetamol in other countries) is used in practically all children worldwide, and pediatricians recommend it every day! Could that really cause autism? Well, if you believe in science, then yes. It does cause autism.

Identifying and treating the cause of disease is one of the most critical aspects of the medical field. Treating symptoms instead of the disease is merely a Band-Aid. Whether it’s ibuprofen to relieve the headache from drinking too much or cholesterol medication to prevent the clots from eating fast food, these are quick fixes that don’t treat the cause of the illness but rather help the patient make it through the day. If treatments are stopped, the condition returns—that is, unless the cause of the disease itself is treated.

A Look into How Autism Occurs
There are two distinct presentations of autism. The less common (approximately 10–20% of children in my clinic) are born with a genetic condition that mimics autism. This could be Fragile X syndrome, a genetic microdeletion or duplication, or a genetic mutation condition such as CHARGE syndrome. There are hundreds of these rare genetic conditions that some children are born with, and often they’re eventually diagnosed with autism, usually through the school system.

The actual genetic condition isn’t known until thorough genetic testing is performed (which sadly is very underperformed by pediatricians). These children develop slowly from birth. They often don’t talk until 4 or 5 and improve gradually with speech and occupational therapies. If your child or a child you know seems to be developmentally delayed from birth, genetic testing, including CMA and WES, should be performed. CMA genetic test looks for missing or extra pieces of DNA, whereas the WES test looks for genes that aren’t functioning.

Most people think, “Why should I test for my child’s genetics? I can’t change my child’s DNA.” This is completely true—we cannot change DNA. However, we can treat poorly functioning DNA! As an example, I have diagnosed almost 100 children with rare genetic conditions, which ultimately caused their autism. A study from Harvard suggests that over 70% of genetic conditions that cause autism are treatable!

I have successfully treated genetic conditions to improve children’s language, mood, and behavior. It can be done! But only if they get tested. Every genetic condition is treated somewhat differently. For example, if your genes that produce thyroid hormone aren’t working, you should take thyroid hormone to remedy this! This is a very simple example, but it is ultimately a simple concept, even if it’s not always a simple solution. If we know what the body can’t do, we might be able to replace that.

Now, that’s only 10–20% of children diagnosed with autism, so what about the other 80–90%? These children have regressive autism. This is when an infant is developing normally—they make eye contact with you, they babble, maybe saying “mama” and “dada,” and then one day, it all disappears. Gone. No talking. No eye contact. Where did that child go? This regression of development usually occurs between the ages of 12–18 months.

Why is there a controversy about this regression? Parents try to identify a cause. “What happened on the day that I lost my child?” Hundreds of thousands of families believe they lost their child around the time of a visit to their pediatrician. Whenever there is blame, there is controversy. Pediatricians would never do anything to purposefully harm a child, so why do parents believe their child regressed near the time of the visit?

The answer is in the science. More and more research is being published to identify the cause of the regression. What we now need to do is share this science with others: other families, other pediatricians, and other policymakers. Our ultimate goal is to help those with autism and prevent other children from getting autism. Making that change will require a change in our beliefs. To paraphrase Einstein, “We cannot solve our problems with the same thinking we used when we created them.” And to paraphrase Yoda, “You must unlearn what you have learned.”

The focus of research identifying the cause of developmental regression of autism revolves around: acetaminophen toxicity.

Toxicity of Acetaminophen
I’m a huge fan of the TV show Scrubs. In the first episode, a new doctor asked the supervising doctor, “What’s the dose of Tylenol for this patient?” The supervising doctor said, “Grab a handful and throw it at her. Whatever lands in her mouth is the right dose!” This is a perfect example of how the marketing of Tylenol (acetaminophen) has swarmed humanity. Acetaminophen must be perfectly safe! Pediatricians recommend it for my child! Well, guess what. It’s not perfectly safe.

Every hospital has an emergency protocol for acetaminophen poisoning. They know it’s toxic, and they know the antidote. In fact, a new acetaminophen IV (intravenous) medication contains the antidote! Why would you give your child a medication that is so poisonous that it contains its own antidote?

It’s true that millions of people take acetaminophen and don’t seem to have a problem. Millions of people eat peanuts without a problem, yet some are individually sensitive and can die due to severe allergic reaction from ingesting them or, in extreme cases, even coming into contact with them. Similarly, with acetaminophen, everyone is genetically different. Some children are highly susceptible to the toxicity of acetaminophen.

A landmark research study from Harvard and Duke scientists was published in 2017, associating acetaminophen with the onset of autism regression. Research at Harvard and Duke is notoriously reliable and respected, and since that study, more and more research finds that acetaminophen toxicity is part of our puzzle of the start of autism. Not every medication is safe for everyone. There are genetic differences between us all.

So, how does acetaminophen cause autism? Science is still trying to figure that out. Many research studies have been published and peer-reviewed showing an obvious association between acetaminophen use and pregnancy or during infancy, increasing the risk of autism. That is why these class action lawsuits are starting—the volume of research showing this association is staggering.

Here are my thoughts. A strong wall in the body separates the brain from the bloodstream, and only certain things can go through this wall. This wall is known as the “blood-brain barrier.” It is strong to protect bad things from entering the brain, such as infections. But guess what opens the blood-brain barrier (BBB) and makes it more porous? You guessed it, acetaminophen. In fact, pharmaceutical companies are looking for ways to get medications into the brain to treat certain neurological conditions. Scientific research shows that giving acetaminophen with certain medications allows pharmaceuticals to enter the brain more easily! And if acetaminophen can allow pharmaceuticals into the brain more easily, what else could cross from the blood into the brain when we take acetaminophen again and again and again? That answer could also be the answer to the autism epidemic.

Make sure you don’t fall into the trap of believing the FDA is protecting you when testing products for safety. For example, there have been zero studies performed to test the safety of acetaminophen in children regarding neurological conditions. Absolutely none.

Furthermore, and shockingly, the FDA allows Johnson & Johnson to sell baby powder containing asbestos. And guess who makes Tylenol (the brand name for acetaminophen)? That’s right—Johnson & Johnson. Don’t assume the FDA or anyone else is protecting your child. They allow many toxic substances to be legally sold in this country.

(I reached out to Johnson & Johnson, the makers of Tylenol, asking them to share their research data confirming the safety of Tylenol in children. They only sent me a form letter back. This form letter is included in my free course.)

Let’s Sum Up
Autism is a growing epidemic and the fastest-growing medical condition in our children. Almost 1 in 5 children have a developmental disability. Some children are born delayed—they may take years to talk, play, and make eye contact. Most of these children have a genetic condition that mimics the symptoms and are therefore diagnosed with autism, but truthfully, the usual therapies aren’t very successful for them. If this is your child’s story, I encourage you to talk with a geneticist or neurologist about genetic testing with CMA and WES. (We order these genetic tests in our office every day—they are a simple cheek swab sample, not a blood draw.)

Autism regression around 12–18 months of age is much more common in autism stories. Your child was saying some words, playing with you, making eye contact, and then BOOM, it all disappeared. This can be due to acetaminophen toxicity. The science is becoming overwhelming. The timing of taking acetaminophen around the time of the immediate loss of skills is the story for hundreds of thousands of children.

If this is also your story, now you understand why it may have happened. My initial goal is to ask pharmaceutical companies to continue to pursue the most effective and safest medications for our children. We are constantly learning, and we should constantly be improving. If a medication used in the past is now found to be harmful, change it! Don’t continue selling the medication that is harming more children just because that’s what we’ve always used and the way things have always been done. Medicine needs constant research and improvements.

Our accompanying goal is to help those who currently struggle with autism. Our clinic is Connecticut’s leading natural medicine clinic and has been helping children with autism recover for almost twenty years.

Want to learn more? Watch my free course, “The Story of Autism.”

All the scientific research studies are downloadable in the course, so you can read them and make your own decision. The course also includes interviews with leading researchers and pediatricians that are in the trenches trying to change things for the better. To help our children. To reverse our autism epidemic.

Dr. Jared Skowron, ND, is Connecticut’s premier doctor helping children with autism on their road to recovery. Dr. Skowron has been voted Natural Nutmeg’s 10Best Holistic Pediatricians for the past four years (2019–2022). Learn more at: www.SpectrumAwakening.com.