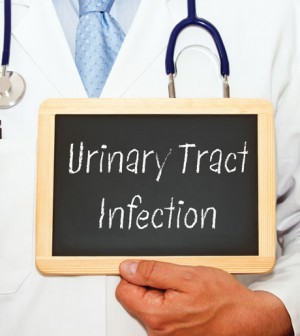 Urinary tract infections are the second most common type of infection in the body,
accounting for about 8.1 million visits to health care providers each year. Women
are especially prone to UTIs for anatomical reasons. . . . UTIs in men are not as
common as in women but can be serious when they occur.
~ U.S. Dept of Health & Human Services
NIH/National Institute of Diabetes & Digestive & Kidney Diseases (www.niddk.nih.gov)

Do you ever experience difficult, uncomfortable, or discolored urination, possibly combined with upper back, abdominal, or side pain? If so, whether a woman, man, or child, you might have a urinary tract infection (UTI). Fortunately, there are numerous natural remedies that may prevent or reduce UTI symptoms.

Causes, Symptoms & Risks
Microscopic organisms (e.g., fungi, viruses, and bacteria) can cause infections. Bacteria in the urinary tract (UT), usually Escherichia coli (E. coli), most commonly causes UTIs. With small projections (fimbriae), the bacteria adheres to the UT’s mucous membranes, thus avoiding being removed by the flow of urine, normally a deterrent to bacterial colonization. The bacteria’s subsequent invasion of the cells of the UT lining prevents antibiotics and the immune system from destroying it.

UTIs can occur in either part of the urinary tract: (1) lower – bladder (cystitis) or urethra (urethritis); or (2) upper – ureters or kidney (acute pyelonephritis). Although typical symptoms are not always present, and UTIs can be mistaken for other conditions in older adults, lower UTI symptoms may include: (1) strong, persistent urge to urinate; (2) burning urination; (3) strong-smelling or cloudy/red/pink (indicates presence of blood) urine; (4) the frequent, limited passing of urine; (5) discharge; or (6) pain in the pelvis/lower abdomen (women) or rectum (men). Symptoms of an upper UTI (more serious; presents risk of kidney damage) may include: (1) upper back, abdominal, and side pain; (2) high fever; (3) shaking/chills; (4) nausea; (5) vomiting; and (6) painful urination.

Disadvantages of Conventional Treatment
Most frequently using a urine dipstick test to diagnose a UTI, physicians examine urine for: (1) red/white blood cells; (2) bacteria; (3) chemicals that E. coli produces; or (4) the levels of proteins the immune system produces in response to infection. They may also use a urine culture to match an effective medication (usually an antibiotic) to the exact bacteria present, or a CT scan, MRI, or cystoscope (to examine the urethra and bladder) if a patient has been suffering recurrent UTIs.

As no single antibiotic is recommended for treating every UTI, doctors generally determine which to prescribe, and for how long, according to a patient’s medical history and the location, degree, and type of infection present. A powerful, effective antibiotic for a simple infection might be prescribed for a week or more, even if symptoms resolve after a few days. UT analgesics might also be indicated to numb the bladder and urethra and relieve burning urination. The frequent recurrence of UTIs may call for: (1) low-dose antibiotics for 6 months or longer; (2) single-dose antibiotics after sexual intercourse; (3) IV antibiotics in a hospital (for a severe case); and/or (4) vaginal estrogen therapy.

While traditional medicine is currently developing other treatment approaches, the preferred, widespread prescribing of antibiotics for UTIs has contributed to a largely unacknowledged United States epidemic of Candidiasis, a fungal infection of any of the Candida species (all yeasts), of which Candida albicans is the most common. By killing both the “bad” bacteria in the UT and the “good” protective bacteria in the intestines, which results in yeast overgrowth, antibiotics can ultimately undermine the immune, neurological, and endocrine (hormone) systems. Not only has antibiotics-exacerbated C. albicans been reported as the most common cause of fungal UTIs (candiduria), but antibiotics can also expose a patient to as many as 56 other potential conditions and symptoms, including: ear-nose-throat/respiratory ailments; emotional problems; brain dysfunction (including ADD/ADHD); digestive ailments; chronic fatigue; skin problems; and addictions/cravings.

Given the many potential side effects from excessive antibiotic consumption, including Clostridium difﬁcile (C. dif) and antimicrobial resistance, it behooves a UTI sufferer to explore natural ways to maintain a healthy UT.

Natural Ways to Maintain a Healthy Urinary Tract
While physician consultation is ideal, there are science-based natural means of protecting the UT long term and supporting it when an infection is present. Some of the more notable UTI remedies are discussed below.

Ascorbic Acid (Vitamin C) – This well-known antioxidant and antiviral may combat UTI bacteria and promote UT health by: (1) boosting the immune system; and (2) acidifying the urine, which may (a) inhibit the growth of infectious bacteria in the UT (this theory lacks strong clinical evidence), and (b) convert bacterial nitrites into nitric oxide, which is toxic to bacteria. After finding in one study that daily intake of 100 mg of vitamin C helped reduce UTIs in pregnant women, researchers recommended that pregnant women in populations at risk for bacteria in the urine and UTIs increase their vitamin C intake.

Cranberry Extract: Cranberries contain anti-inflammatory proanthocyanidins that prevent adhesion of bacteria in the UT by rendering its cells too slippery. In one 6-month study of 137 women (age 45+) with previous UTIs in the past 12 months, researchers concluded that the administered antibiotic (trimethoprim -100mg) “had a very limited advantage” over the cranberry extract (500mg) “in the prevention of recurrent UTIs . . . and had more adverse effects.” Sweetened cranberry juice is NOT equivalent to cranberry extract in UTI treatment because sugar: (1) feeds E. coli and Candida; (2) impairs immunity; and (3) increases the acid level of urine to render the environment more hospitable to E. coli (E. coli can survive in acidic environments that are lethal to other pathogens, including even urine with a pH = 2) (normal urine pH = 6.5 to 7.5).

Curcumin from Turmeric: Studies have shown that this polyphenol, which combats inflammation and oxidation, has therapeutic application against bacteria including E. coli, infection, and fungus/yeast and viruses. Since it is poorly absorbed from the intestines, and is rapidly metabolized and eliminated, it is important to select one of the several available curcumin preparations that incorporate a drug delivery system. These enhance curcumin’s absorption beyond the common turmeric that is standardized to 95% curcuminoids.

D-Mannose: This sugar, found in cranberries and other foods, prevents bacteria from adhering to the UT lining by binding to the lining’s cells. In one 6-month study of 308 women with a history of recurrent UTIs, researchers compared D-mannose powder (2,000 mg) with an antibiotic commonly used to treat UTIs (Nitrofurantoin 50mg). Urging that further research be conducted, they concluded that the D-mannose and antibiotic equally “significantly reduced the risk of recurrent UTI,” and that D-mannose presented significantly lower risk of side effects and may be useful for UTI prevention.

Probiotics: The recurrence of UTIs is often associated with decreased levels of Lactobacillus, one family of beneficial bacteria in the gut. Research has proven these bacteria strains in particular to be a promising natural treatment for UTIs. They are thought to heal by either: (1) competing with other bacteria for various resources; (2) boosting the immune system and secreting natural antibacterial chemicals, such as hydrogen peroxide and lactic acid; or (3) preventing pathogenic bacteria from adhering to the UT. In one study, researchers found that the two Lactobacillus bacteria strains used to treat uncomplicated recurrent UTIs (L rhamnosus GR-1; L. reuteri RC-14 ) were only slightly less effective than the antibiotic combination administered to the comparison group of postmenopausal women.

The statements in this article have not been evaluated by the Food and Drug Administration (FDA) and are not intended to take the place of a physician’s advice. Unless supported by specific cited research, the natural remedies discussed herein are not intended to diagnose, treat, cure or prevent any disease.

Submitted by Michael Dworkin, PD, CCN, a Registered Pharmacist and State Certified Clinical Nutritionist (CT Cert. No. 232), with J. Erika Dworkin, Certified Lifestyle Educator and Board Cert. Holistic Nutrition (Cand.). Owner of the Manchester Parkade Health Shoppe (860.646.8178, 378 Middle Turnpike West, Manchester, CT, www.cthealthshop.com,) Pharmacist Dworkin has been guiding patients since 1956 and is available for consultation by appointment. Erika is available to speak to groups. All statements in this article are research-based and references are available upon request.