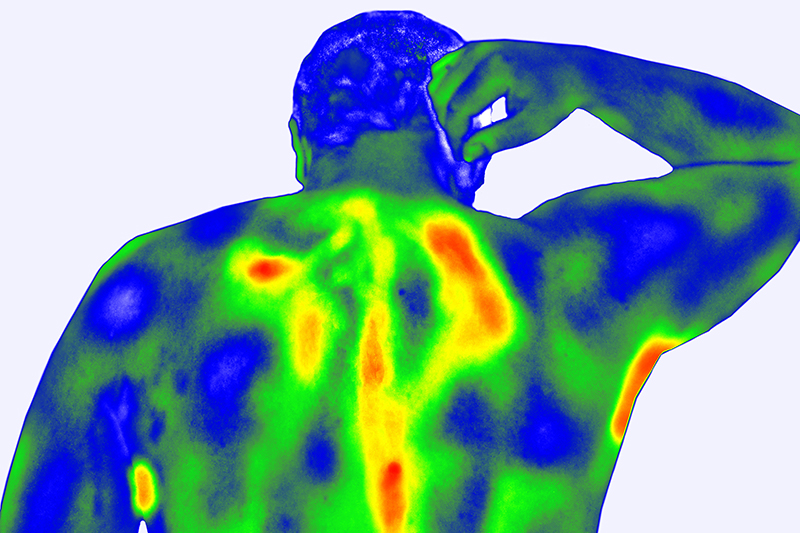 It is rather well known that thermography is incredibly effective in screening for breast cancer—it does not expose the body to radiation, is painless, noninvasive, and aids in detecting inflammation, disease, and cancer. However, thermography can also be used as a naturopathic screening: a proactive, whole-body approach to wellness.

The Science behind the Screenings
Thermography measures the infrared radiation (heat) that emits from the surface of the body. Areas of abnormality, pathology, or disease will be observed as either hot or cold depending on the metabolic activity. An ultrasensitive thermal camera and a sophisticated computer are used to convert the infrared heat into electrical impulses that are visualized in color, known as a thermogram.

In a normal, healthy state, the body has a thermal symmetry that should stay stable over a lifetime; asymmetrical patterns emerge only when some type of pathology develops and can be easily identified. When used as a screening tool, thermography allows the visualization of the most subtle temperature differences in the body. The asymmetry seen on a thermogram helps identify suspicious areas and aids in the earlier detection of disease.

Not Just for Breast Health Anymore
Although thermography is best known for imaging and assessing breast health, it has a wide range of other applications due to its ability to view inflammation—a precursor to many diseases such as heart disease, diabetes, arthritis, and cancer. Whether looking at the lymphatic or cardiovascular system or at specific areas of the body such as the oral cavity or the breasts, a thermogram views these as one system—the whole body. Some of the benefits of whole-body thermography screening include:

There is never a better time than the present to make lifestyle changes for disease prevention, improving your lifestyle and increasing your immunity, even if you are completely healthy. The information gained from a thermogram is valuable to men and women of all ages, and most importantly, getting a thermography screening is a giant step in the right direction toward improving your health.

April Beaman, RDH, CTT, is a medical thermographer certified by the Professional Academy of Clinical Thermology and a professional member of Breast Thermography International. Beaman has worked in the wellness industry for over 15 years and provides thermography screenings and wellness support for both men and women of all ages. She is the owner of CT Thermography located in Farmington, with satellite offices in Glastonbury, CT, and Hadley MA.