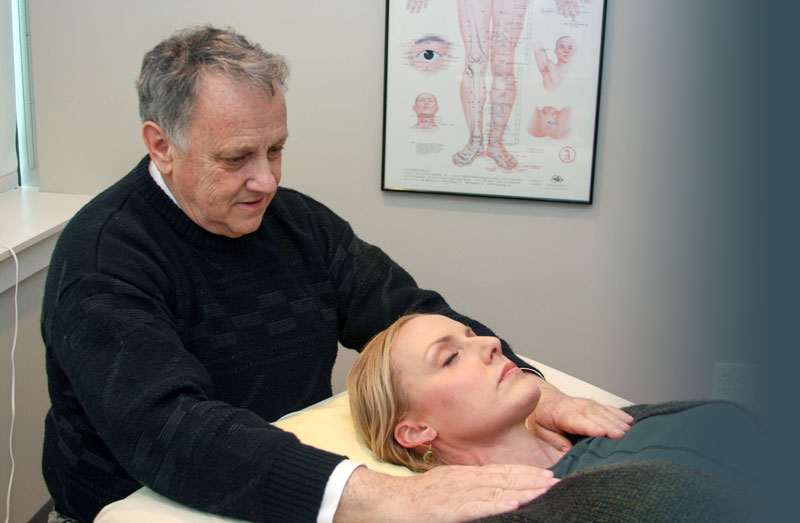 Massage Therapy as Treatment for Fibromyalgia
Natural Ways to Promote Breast Health & Prevent Breast Cancer (Part 1)
Do You Really Know What Hormones Do?

Lyme patients often present as complicated cases with various symptoms that can affect a multitude of body systems. Lyme patients are often more predictably helped by combining both Eastern and Western healing modalities. EAV or electrodermal screening is a modern twist on what has been utilized for thousands of years in the Eastern Healing Arts, where physicians looked at the flow of Qi (Chi) within the meridians to better understand what was going on with their patients, and how to best treat them. EAV is an excellent tool for uncovering issues within the body’s meridian systems and detecting signals of toxins and infections.

Over 3,000 years ago the Chinese developed a system of medicine that was based on the premise of Qi; Qi being the life force. This life force goes throughout our body and is responsible for our health and well-being, as well as our longevity. If the Qi doesn’t flow correctly and at the right time of the day, it could lead to imbalances which eventually can manifest as disease. The Chinese now admit that outside factors like environmental influences, toxins, and infections such as the Lyme spirochete, can also block Qi. The blockage of Qi is a significant problem in both Eastern and Western medicine. In Western medicine, the newest term for Qi is “bioelectromagnetic energy.” Electromagnetic energy can be quantified, measured, and photographed.

We have different systems in our body, such as the circulatory system, the lymphatic system, the nervous system and now we also recognize the “electromagnetic” system. If we cannot achieve full-functioning of the energetic body, then healing cannot occur. Indeed, you can have the correct diagnosis, appropriate medications (be it Eastern or Western), as well as a compliant patient, but if the Qi is severely blocked healing will not follow.

Reiki falls into the genre of oriental medicine and is best termed as “energy work.” Traditional Japanese Reiki differs from Western Reiki much as checkers differs from chess. The board (or the patient) is the same, but the pieces and the moves are all different. Traditional Japanese Reiki has two hundred and twenty hand positions, while in America there are only seventeen. Treatments are guided by traditional Chinese pulse and tongue diagnoses as well as Byosen, an energy palpation technique. In Japan, it can take up to six years of study and practice to become certified as a Reiki Master. There are few traditional practitioners of Japanese Reiki in the U.S.

Often, we utilize Reiki in our practice for Lyme patients. Patients who had been on Western treatments for years with little to no effect are getting better.

Maggie, a young student, was one of our first neurologic Lyme cases that we treated together. Maggie had a long list of problems that were secondary to Lyme. Severe insomnia, inability to hold a conversation, destructive behavior and more. Both with EAV testing and with John’s assessment we found blockages along meridian pathways feeding her brain.

With Lyme, certain systems tend to come under assault a little more than others. From a Qi perspective, we find that the excretory organs can be problematic with Lyme disease. We can determine if a person is in an active stage of infection, or, for instance, if their brain or gall bladder is likely infected. While treating the infection, it’s essential that the excretory organs, such as the kidneys and liver, do not have their Qi blocked. When the spirochetes die in your system, if you can’t get rid of them they can produce toxins and those toxins can make you sick. However, once the energy systems in the body are unblocked, we can begin to introduce things like homeopathic medicine, botanicals and other frequency treatments to kill the infectious microorganisms and ameliorate the detoxification symptoms.

In Maggie’s case, when we opened her meridian blockages, her condition began to improve. She started communicating, sleeping, and the natural antimicrobial therapies she was given began to lower her infectious load. David, a 13-year-old patient, had been suffering from tick-borne diseases such as Lyme and Bartonella. He had symptoms of depression, brain fog, fatigue, and weakness. Even though being on antibiotics for many months, he was not improving. Once again EAV assessment showed that there were significant energetic blockages. David’s body was literally “starved” of Qi. In his first session, David came out of the room laughing and giggling. After several more sessions David declared, “I’m starting to feel better!” something that he had never expressed before. It’s worth noting: If you don’t have your energy, you don’t have your health.