My Journey with Lyme Disease 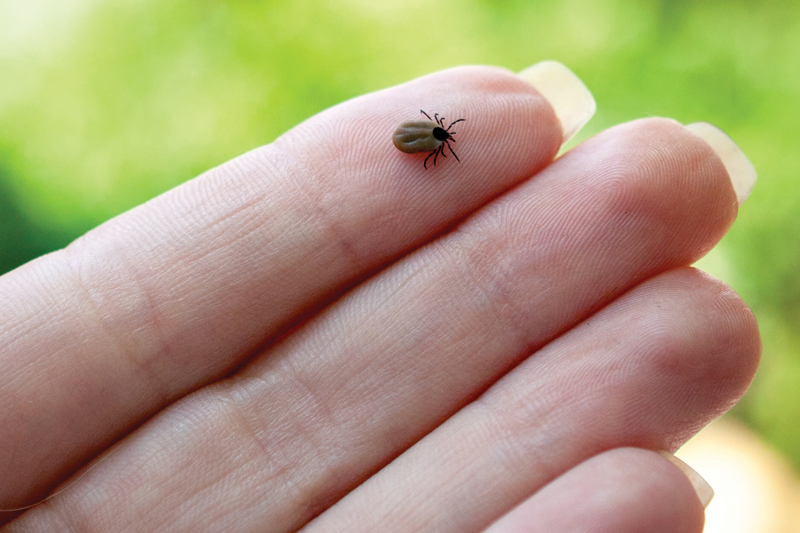 I don’t suppose you can call it lucky, but I knew I had Lyme disease within the first few days. No rash, no bull’s-eye. I made some mistakes but also found some amazing truths throughout this adventure that I’d like to share with you.

Every Sunday for the past six years, I hike with a group of friends and our dogs. We are out in the deep forests; temperatures usually don’t matter for our regular Sunday morning romp, but I do draw the line at pouring rain! I am always careful, especially in the warmer months, to spray my boots, my clothes, and my dogs with tick preventative.

In the shower one day after a particular June hike a few years ago, my hand rubbed against something near my groin. It didn’t move. I tried to look closer while at this awkward angle; it appeared to be a small black something stuck to my skin. I casually scraped it off my body with my fingernail, oblivious to the danger ahead. I later put it under a magnifying glass and saw it was a tick. Erg!—scraping it off was the wrong thing to do. I knew I should instead have handled it with tweezers. I dropped by my doctor’s office later that day and to my surprise, they told me they don’t test ticks. Rather, I was told to wait and see if I got any symptoms or a bull’s-eye. That seemed very wrong to me, but I felt I had no other recourse, as I was totally new to this experience.

After a few days, I began to feel like I had the flu—achy, uncomfortable, with a headache that felt like I was being squeezed with a vice-grip. Not my usual self, I waited a couple of days in case I had merely caught some kind of flu. If that were the case, it would resolve quickly as things typically do for me. Instead, it only got worse. I called my doctor, who knows me and knows I am not a medication person. She listened to me, heard about the tick I had removed a few days before, and gave me the standard dose of three weeks of amoxicillin.

However, I am not your uninformed consumer. I have had many clients and friends who have experienced Lyme disease, and some of them have chronic Lyme. The window is around a month to receive treatment after the tick bite, before the disease begins to take effect. Unfortunately, some people have been misdiagnosed early on, and the disease progressed for years without proper treatment. These individuals live with many forms of inflammation and distress. One woman I know could, on a good day, get out of bed and get dressed by herself. On a bad day, could barely get out of bed and spent the day in her nightgown. She realized she was very ill when, while driving home from work one day, she saw something on the side of the road and didn’t connect with what it was. She realized as she pulled into her driveway, that what she had seen had been a stop sign, but she’d had no idea what it meant as she drove by it. That’s when her chronic Lyme turned the corner. She had such brain fog she had to stop working, take to her bed, and seek out care to preserve what was left of her brain.

This was not going to be my future. I read everything I could on Lyme disease, interviewed those I knew with chronic Lyme, and had the opportunity to engage with recordings from a national conference with leading experts in the alternative field around that same time. Everything they said was against the traditional three-week course of antibiotics—they suggested four to six weeks as a minimum for an early diagnosis of Lyme.

The cycle of the spirochetes, the spiral-shaped, slender bacteria that causes Lyme disease (and other diseases such as syphilis and relapsing fever—a tropical disease) is mostly complete after three weeks. But, in cases where there are some replicating forms of spirochetes still present, the problem is not solved and the spirochetes again begin to multiply. This can create neurological, cardiac, and/or joint abnormalities and chronic infection. Another considerable variable is the host’s immune system.

I was not going to let suffering from Lyme disease be part of my story. I didn’t survive breast cancer and crippling Bell’s palsy—both of which were accompanied by many complications and surgeries—to be taken down by Lyme. I got back in touch with my doctor, stated my findings, and basically insisted that she double my dose of antibiotics to make up six weeks of treatment. I told her that I didn’t want to see myself in five years, chronically ill with all that Lyme brings, knowing that I could have had a different outcome if I just spoken my truth. She agreed. She had to! I was insistent. The raging vice-grip headache took four days to let go and the body ache soon followed. I took my pre- and probiotics to combat the effects of the amoxicillin and got lots of rest. Six weeks of a strong antibiotic was a long time, but worth it.

Moral of the story: Be aware, stay awake, do your homework, and live by your convictions. Surround yourself with medical people who will listen to you. After all, it is YOUR body, YOUR life and ultimately YOUR responsibility to be your most healthy and whole self. As a Rolfer, I can take people to a place where they can make choices to change how they live in their physical world, find their physical neutral, become more aware of their bodies, and use them more effectively. My clients heal themselves; I just show them the way.

Sharon Sklar is in her 40th year of private practice as a Certified Advanced Rolfer. State licensed and the only Rolfer in Central CT, Sharon works with direct manipulation of the soft tissue of the body and movement re-education over a ten-session series to help her clients feel freer, get more balanced, and reduce chronic pain. Great for athletes, children, and adults recovering from injuries, stress, and traumas of life. Call 860.561.4337 for more info or to schedule a consultation. SharonSklarRolfing.com.