The Truth About Non-GMO Soy: A Nutritional Powerhouse 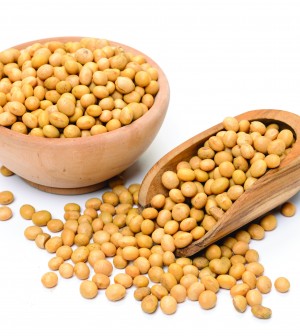 No sooner did the FDA take the highly unusual step of allowing a health claim
to be made for soy as a food in 1999, than it came under attack by a vocal minority of
“concerned citizens”—some of whom were found to represent a narrow segment of the
food industry threatened by soy’s profits. …. [C]onsiderable misinformation
now contaminates the discussion of soy’s real impact on health. Instead of enjoying the broad
range of benefits, many aging individuals are unnecessarily fearful of consuming soy products.
~ Life Extension Magazine July 2010 (Oscar Rodriguez, 121 references)

Do you believe that soy, a plant protein derived from the soybean (a legume), is unhealthy? Or are you just confused about whether it offers any health benefits? The controversy that arose after the FDA allowed a health claim for soy in 1999 resulted in substantial amounts of clinical research. Below is information (especially relevant for vegetarians, vegans, and post-menopausal women) that can help you decide whether including soy in your diet, as a food or dietary supplement, is right for you.

The FDA-Allowed Health Claim
In April 2014, the FDA updated in the Code of Federal Regulations (21CFR101.82) its allowed health claim for soy related to coronary heart disease (CHD), which it describes as “one of the most common and serious forms of cardiovascular disease” that “refers to diseases of the heart muscle and supporting blood vessels.” According to the FDA, “diets high in saturated fat and cholesterol are associated with increased levels of blood total and LDL-cholesterol and, thus, with increased risk of CHD.” While the impact of high cholesterol on CHD [versus other factors, such as C-reactive protein (CRP) levels] is itself controversial, it is nevertheless important to note for purposes of this article that the FDA allows health claims similar to this model: “Diets low in saturated fat and cholesterol that include 25 grams of soy protein a day may reduce the risk of heart disease. One serving of [name of food] provides __ grams of soy protein.” The claim does not reference soy isoflavones, discussed below.

Soy is one of five major GMO food crop varieties, the others being corn, canola, cotton, and sugar beets. GMO stands for “genetically modified organisms”, which refers to any food product that has been altered at the gene level. Specifically, scientists insert bacterial genes in GM plants, allowing them to survive an otherwise deadly dose of weed killer. GM crops thus have higher herbicide residues. According to the American Academy of Environmental Medicine, animal studies prove that “GM foods pose a serious health risk in the areas of toxicology, allergy and immune function, reproductive health, and metabolic, physiologic and genetic health and are without benefit.” As of the writing of this article, the use of GMOs is prohibited in organic products. (USDA Blog, May 2013) It is most prudent to consume only organic/non-GMO soy.

The Soy Controversy
Below are some of the principal anti-soy arguments and their scientifically supported counterarguments.

Myth #1 – Soy causes or increases the risk of cancer.
Soy contains isoflavones (genistein, daidzein), antioxidant polyphenols that are viewed as phytoestrogens (estrogens from plants) because of their molecular similarity to estradiol, one type of carcinogenic estrogen.

Estrogen influences cells through estrogen receptors. Soy critics focus on isoflavones’ action on estrogen receptors, failing to consider that the body has more than one type, each which affects the body differently. Until relatively recently, only one estrogen receptor (ER-alpha) had been discovered. Overexpression of ER-alpha has been implicated in various cancers, including breast cancer, ovarian cancer, endometrial cancer, and colon cancer. In the late 1990s, scientists discovered a second estrogen receptor (ER-beta), expression of which appears to counteract many of the cancer-causing activities of ER-alpha. The discovery of ER-beta estrogen receptors, their cancer-inhibiting effects, and the preferential influence of isoflavones on these receptors, in addition to extensive human epidemiological and clinical studies, indicate a favorable soy isoflavone –cancer connection. Even the American Cancer Society recognizes that soy isoflavones have anti-estrogenic, antioxidant, and anti-inflammatory properties (www.cancer.org, McCullough 2012), and some studies show that isoflavones are breast cancer protective (JAMA 2009 Dec) (Eur J Cancer. 2005 Mar; enhances tamoxifen).

Myth #3 – Soy causes thyroid dysfunction.
Following the announcement of the occurrence of goiter in a single infant on a pure soy diet (N Engl J Med. 1960 Feb), soy critics extrapolated the risk to the general population. While soy isoflavones inhibit an enzyme involved in thyroid hormone synthesis, they do not cause poor thyroid function in otherwise healthy individuals who have adequate iodine intake. (Thyroid 2010 July; Thyroid. 2007 Feb)

Like fiber supplements and some medications, however, soy isoflavones may prevent absorption of some of the iodine normally used to make thyroid hormone. Those who frequently consume large amounts of soy thus may need slightly more iodine in their diets. (Note, however, that excess iodine can slow thyroid function.) Also, soy can reduce the absorption of hypothyroid medications, and thyroid expert Stephen E. Langer, MD, recommends that hypothyroid patients minimize soy consumption “until their condition is corrected or supplemented with thyroid hormone.” Andrew Weil, MD, advises that a hypothyroid patient can safely eat one soy serving per day at least three hours apart from thyroid medication intake.

In considering whether to incorporate soy foods or supplements into your diet, consider all of the evidence, your doctor’s specific guidance, and whether a soy allergy or intolerance may be a factor. While rarely life threatening, soy allergy/intolerance is common, especially among children, and can manifest as tingling in the mouth, eczema or other dermatitis, breathing difficulties, digestive problems, skin flushing, or swelling (www.mayoclinic.org).

The statements in this article have not been evaluated by the Food and Drug Administration. Unless otherwise stated herein or otherwise supported by specific research, the natural remedies discussed herein are not intended to diagnose, treat, cure or prevent any disease.

Submitted by Michael Dworkin, PD, CCN, a Registered Pharmacist and State Certified Clinical Nutritionist (CT Cert. No. 232), with J. Erika Dworkin, Certified Lifestyle Educator and Board Cert. Holistic Nutrition (Cand.). Owner of the Manchester Parkade Health Shoppe (860.646.8178, 378 Middle Turnpike West, Manchester, CT, www.cthealthshop.com), Pharmacist Dworkin has been guiding patients since 1956 and is available for consultation by appointment. Erika is available to speak to groups. All statements in this article are research-based and references are available upon request.