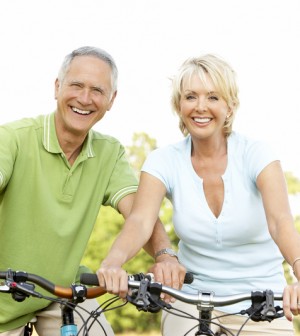 Healthy aging is a topic that gets more and more vital each year. More than 40 million Americans are 65 years old or greater and the proportion the U.S. population over 65 is anticipated to keep increasing. Human lifespans are now at the longest they have ever been but more and more are questioning the best ways to ensure the quality of those extra years.

Aging is a complex process with many contributing environmental and genetic factors. While a person’s lifespan is not absolutely programmed into their genes, longevity is dependent on genetic mechanisms. This means that a doctor can’t run a genetic test to see what age you will live to, but they can see how well or poorly you are aging on a genetic level. The damage that we accumulate through our lives is reflected in certain areas of our genes, and these areas in turn shape the ability of our cells to continue to function.

These genetic keys to aging are called telomeres. The word means “end part,” and telomeres form the end structure of every chromosome. Telomeres have recently garnered increasing attention. There are now thousands of articles published every year on telomeres where as recently as 1995 there were less than a hundred. The popular press has been even more enthusiastic. NBC’s Today show recently featured telomeres and hailed them as the secret to aging and ABC World News even called them a modern-day Fountain of Youth.

Unfortunately, human biology does not work that easily. There is no magic pill around the corner that will turn back the aging clock. Telomere research is genuinely exciting and even revolutionary, but aging involves many factors which will prevent any silver bullet solutions.

Telomeres are something like the plastic tips on the end of shoelaces. DNA molecules are formed like an extension ladder that somebody has taken and twisted along the long axis so the uprights spiral around each other. This is the famous “double helix” that James Watson, Francis Crick and Rosalind Franklin discovered in 1953. Each side of the helix is a chain of sugars, while the rungs are pairs of complementary bases. There are four bases that make the letters of the DNA alphabet: Adenine, Cytosine, Guanine and Thymine. Adenine (A) always links to guanine (G) and cytosine (C) always links to thymine (T).

This complementary pairing is what allows DNA to replicate, or to make new copies. During replication, the DNA molecule is “unzipped” by enzymes. This produces two half-strands of DNA, and each can be the template to build a new complete strand. Every time one half-strand displays an A the opposite half of the rung must be a G. The machinery of the cell works along the half-strand, adding the missing letters and creating two copies of the original DNA.

There is a quirk in this process, however. The enzymes that add the new DNA bases to the growing chromosome go through a number of steps that require reading the existing strand so that they can correctly build the new bases. Effectively, these enzymes are reading the old strand a few rungs ahead of where the new strand is being built. This leads to the “end-replication problem,” where the old strand runs out of template rungs before the new strand is finished. Telomeres are repeating sequences of TTAGGG that finish off each end of a chromosome. When replication reaches these sequences, the last repeat is not rebuilt into the new strands.

This preserves the meaningful genetic information but it also means every time that a cell divides, the telomeres get shorter. When the telomeres in a cell get too short, then the cell dies. This limits a cell to somewhere in the range of 40 to 60 divisions in non-cancerous cells. By looking at the length of the telomeres in a cell, therefore, scientists can tell if a cell can continue growing and dividing or if it’s near the end of its lifespan. Looking at an average length of telomeres from a larger sample of cells, such as a blood sample, will tell you how well you are aging. That is, long telomeres are directly reflective of years of healthy living, while short telomeres indicate accelerated aging. What such a test won’t do is tell you how long you have to live or what your remaining life expectancy is or what age you will live to.

Some research studies using centenarians, that is, people at least 100 years old, offer the greatest demonstration of this. Living to 100 used to be extraordinarily rare but the number of centenarians has increased greatly in the last 20 years. In 1990, 37,306 Americans out of a population of 31 million were 100 or older. As of December, 2010 that number had increased to almost 72,000 and it is estimated to exceed 600,000 Americans by 2050.

Although we expect that aging equals dysfunction, centenarians tend to be healthier than the average person twenty years younger. This makes sense in that you don’t live to be a hundred years old without being healthier than the average person when you are younger. Two studies have shown that healthy centenarians have longer telomeres than ones that had conditions such as hypertension, congestive heart failure, myocardial infarction, peripheral vascular disease, dementia, cancer, stroke, chronic obstructive pulmonary disease, and diabetes. These diseases may be stereotypically part of aging, but more importantly they all progressively cause damage to cellular machinery. Finding that this progressive damage is reflected in telomeres is not surprising and it emphasizes how telomeres accurately reflect the difference between aging healthfully and aging poorly.

As mentioned earlier, building a new strand of DNA uses the old one as a template except when it gets to the end. The question becomes, then, how are new telomeres created or old ones extended? An enzyme called telomerase provides the template and builds telomeres. If a person has many active copies of the telomerase enzyme in their cells, then they will have longer telomeres. By preventing premature shortening of telomeres, a high level of telomerase activity prevents premature cellular death.

While high levels of telomerase activity in normal cells is beneficial, it can turn problematic in cancer cells. By itself, telomerase cannot cause a normal cell to turn cancerous. When damage to other parts of the chromosomes accumulates, however, cells that have a lot of telomerase can avoid one of the mechanisms that kills diseased cells. For this reason, some scientists are investigating telomerase inhibitors as a cancer treatment.

Most people, of course, will want to stimulate telomerase activity. Right now there are no drugs that will do this but the good news is that the relationship between healthy living and telomere length goes both ways. Healthy living can actually extend telomeres. Improving telomerase activity or telomere length has been demonstrated by nutritional methods, reducing stress, increasing antioxidant activity, increasing physical activity, and smoking cessation. Specific nutrients that are important to telomere health include certain B vitamins, Vitamins A, C, D, and E, magnesium, zinc, and iron.

The B vitamin folate (B9) is probably the most important vitamin for telomere preservation. If there is not enough folate available in the cell, some or even all of the T bases in the TTAGGG sequence of a telomere can be replaced by a similar substance called uracil. This will cause the telomers to be effectively truncated at the substitution site. Low folate levels also make the construction of DNA strands more difficult and error-prone. Folate is available in foods like green leafy vegetables like spinach or broccoli, beans and legumes, liver, and yeast.

Vitamin B12 catalyses reactions that are important in DNA maintenance, and women taking B12 show longer telomeres than those that don’t. B12 is found in foods that come from animals, including fish, shellfish, meat, poultry, eggs, and milk. Vegans and vegetarians are particularly susceptible to having a dietary shortage.

Nicotinamide or niacin (Vitamin B3) is needed for production of enzymes that regulate telomerase, so it is also very important for protecting telomere length. B3 also indirectly reduces the number of free radicals which can damage DNA in general. It is found in animal foods like organ meats, fish, milk, and eggs and in plant foods such as avocados, dates, tomatoes, leafy vegetables, peanuts, and cereal grains. Pregnant or nursing women may require higher doses of folate to ensure normal fetal neurological development.

High normal levels of vitamins A and D in the blood are also associated with longer telomeres. Both vitamins operate generally against inflammation, infection, and cancer genesis, thereby helping maintain telomere length. Vitamin A is found in a wide variety of foods, especially liver, carrots, and broccoli and vitamin D is synthesized in the skin and found in fatty fish such as catfish and salmon.

Magnesium catalyzes a wide variety of enzymes involved in DNA repair and replication, as does zinc. Adequate levels of both have been linked to increase telomere length. Both are present in a wide variety of foods, although usually at low levels.

Unlike all of these nutrients, iron is linked to shorter telomeres because excess iron can create free radicals which damage DNA. While iron is vital in producing hemoglobin in red blood cells, too much can cause damage throughout the body.

If all that sounds like a lot of difficult and particular dietary recommendations, remember that a generally healthy diet should help provide these nutrients in adequate amounts. A modified Mediterranean diet of multiple small meals that is based mostly on plants and is low in high-glycemic carbohydrates like refined sugars and processed food is the basis for healthy living. Such a diet will include good amounts of organic fruits and vegetables and also moderate amounts of lean meat, low-mercury fish, and poultry and also healthy monounsaturated fats. Avoiding unhealthy ingredients like chemical additives, MSG, and artificial sweeteners and saturated fats will also help. This type of diet will not only help maintain telomerase activity and telomere length, it will also have great impacts on cardiovascular health, metabolic syndrome and in helping prevent cancer. Omega-3 fatty acid and antioxidants like green tea or grape polyphenols are also both generally healthy for many biological processes and specifically linked to longer telomeres.

Alternity Healthcare provides nutritional counseling to help you maintain such a healthy diet. We can also provide high-accuracy nutritional profiling to find which nutrients you are receiving at healthy levels and which are missing and may require help from nutraceutical supplements to achieve optimal levels.

Other things you can do to improve your telomeric health include reducing your exposure to oxidative stress that causes DNA damage. This means reducing both psychological and physical or environmental stress. Maintaining a healthy body composition without excess body fat is part of this, as is avoiding excess alcohol consumption and smoking. Exercise, both aerobic exercise and resistance exercise, are also vital for both overall health and for telomere maintenance.

Telomeres are probably best thought of as the canaries in the coal mines of our cells. They tell us not how long we have to live but how well we have been living. Alternity Healthcare is proud to offer telomere testing to our patients so that we can use this knowledge to create a healthier road map for your continued life.

Desmond Ebanks, MD is a board certified internal medicine physician specializing in age management medicine; a science-based approach to preventive wellness, bioidentical hormone modulation and optimizing health at Alternity Healthcare, LLC in West Hartford, CT.   He can be reached at 860-561-2294 or online at www.alternityhealthcare.com.