Menstruation, the Moon and Empowerment through Choice 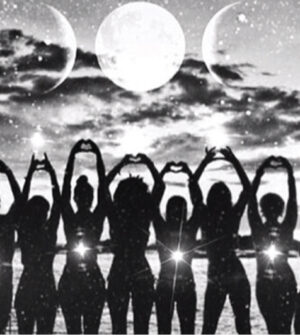 Every 21-to 35 days women bleed for 2-7 days in order to biologically bear children in a grand sacrifice of their body to perpetuate the human race. What does our period (aka menses) mean to us? How do we prepare for and manage this integral part of our nature? What influences “it’- does the moon? other women? How do we deal with and treat menstrual diseases? These are questions that can not be answered in one paper, however, they are worth a lively discussion that is long overdue to reclaim the “cur-sed” parts of ourselves that happen to make us uniquely female.

What is Menstruation?
The word menstruation, comes from the word “menses” which comes from Latin and Greek words meaning month (mensis) and moon (mene). Is it a coincidence that the moon cycles through the night sky in a similar time frame to our own hormonal cycles? Historically and culturally, due to books such as “The Red Tent,” by Anita Diamant, many women realize that we used to gather monthly, usually at the full moon (or new moon) and talk, do each other’s hair, and be in the unencumbered company of other women. Knight in his thesis on Menstruation and the Origins of Culture sees the history and mythology that shrouded this “moon time” gathering as a ritual time that women created to be free of the responsibility of male sexual advances and influenced the periodicity of hunting expeditions and organized society. Over time, the lore, customs, and taboos associated with menstruation took on more sinister hues, such as, being “unclean”, ruining food if you touched it, dangerous, and even deadly.

How do we claim this messy part of ourselves and manage it in ways that lead to a greater connection with nature, our biological sisters, greater community, and improve our health and wellness in the process? Let’s start by addressing some myths and facts.

Do We Cycle with the Moon?
Despite many historical and cultural references there is little evidence to support an association between lunar cycles and our periods. Dr Marija Vlajic Wheeler at Clue, an app used to track menstrual cycles found no association with the moon cycles and period times when analyzing 7.5 million cycles. There may be a weak association between lunar cycles and ovulation. Dr. Ericka Friedman at the Brooklyn College of the City University found that conceptions occur significantly more frequently during the first and second quarters (waxing moon) than during the other half of the lunar cycle, which indicates a lunar influence on ovulation.

“The menstrual cycle is the most basic, earthly cycle we have.
Our blood is our connection to the archetypal female”
~ Dr Christine Northrup

Do We Cycle Together?
Research by Martha McClintock in 1971 hypothesized and popularized synchronous menstruation, the notion that women who spend more time together synchronize their menses together based on her study of 135 women whose onset of menses was more similar among friends and roommates than it was random pairing. She hypothesized that this effect was due to pheromones, which are invisible olfactory neurochemicals that reach our brains and influence our biology and behavior. So far, there is little scientific evidence to support this theory. Using data from the app Clue, researchers did not find a correlation between women synching up their menses with other women using information from 1500 women.

Is Melatonin Our Mediator with the Moon?
Dr Sari Cohen, ND hypothesized that our menstrual connection to the cycles of the moon may be influenced physiologically by the effect of melatonin, a hormone that is tied to circadian sleep cycles and is released in the dark. The evidence she provides for this assertion includes that the pineal gland, a hormone regulating structure in your brain that is part of the neuroendocrine system, is sensitive to light and influences menstrual hormones as well as melatonin. Melatonin levels tend to be higher during menstruation and lower during ovulation with other reproductive affects.

If melatonin is a mediator of menstruation through its effects on the pineal gland and our exposure to light influences this rhythm, it is clear that this system has many disruptors in our modern times. Artificial Lighting, enhanced by “screen-time”, Electromagnetic Frequencies (EMFs), night-shift work, exogenous hormones, endocrine disrupting plastics, pesticides, medication, and birth control pills we are exposed to in our daily lives and environment may play a role in the disruption in our natural rhythms and connection with the moon and our nature rhythms, as well as, increase our risk of chronic diseases and the rising rates of infertility.

Effective Integrative Medical Treatments for Menstrual Disorders
Integrative medical treatments for which there is evidence for effectiveness in treating menstrual disorders with minimal to no side effects includes: nutritional supplements prescribed by a naturopathic doctor or functional medicine practitioner, energy medicine, yoga, meditation, energy psychology, exercise, body therapies (chiropractic care, manual therapy, craniosacral therapy, etc.). The benefit of using these integrative therapies instead of the birth control pill as first line medical therapy for the treatment of menstrual disorders is that it poses no risk and can result in benefits beyond the treatment of the menstrual disorder, such as, improved sleep, digestive function, immunity, psychological and physical well-being. In Traditional Chinese Medicine, our menses are an important sign and symptom of how our general health is and its treatment, rather than being suppressive, is supportive along with the whole system to bring the mind, body, and spirit back into balance.

Have We Lost Touch with Each Other and the Influence of the Moon?
“It is argued that at times marked out by the moon’s phases, women used ritual means to bring their emotional energies into harmony, this cultural intervention in turn assisting in the realization of women’s physiologically-given potentialities for synchrony,” states Knight. Knight asserts that the synchronization of menstrual cycles and secluded moon time served less as a scientific fact than a cultural way to organize society that left women time to gather. “If we could discern something universal within ritual and mythology which pointed unmistakably to menstrual synchrony as its source, then matters might be different”. It is up to us, as individuals, and as a collective group to choose to reimagine, and rebrand our moon time and how we treat it. Regardless of the paucity of data to suggest we synchronize our cycles with the moon and with each other, there is great potential benefit in ritualizing and celebrating our light and dark cycles and to gather, empower, and support each other in a holistic way through our joy and suffering and maybe even howl at the moon once in a while.

Dr. Artemis Morris is the Academic director of Master in Integrative Health and Healing at The Graduate Institute www.learn.edu; Professor of Nutrition at The University of Bridgeport, Human Nutrition Institute; Medical director and founder of Artemis Wellness Center: www.drartemis.com and author of The Anti-Inflammation Diet for Dummies. She is an integrative medical practitioner and enjoys lecturing on holistic health and the Mediterranean diet for medical conferences and to a wide array of audiences.