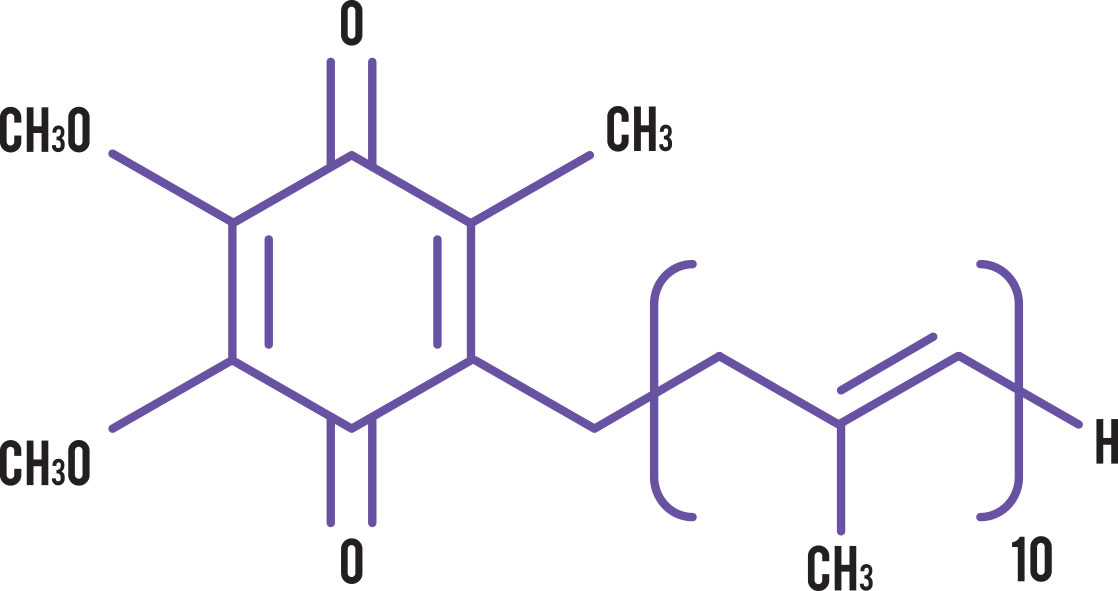 Can Food Allergies Increase with Age?
The Root Cause of Autoimmune Disease
Oh, Sweet Slow Waves of Deep Sleep! A Deep Dive into Dreamland

If you’re older, your body becomes more and more challenged to
convert the oxidized CoQ10 to ubiquinol . . . Further, as you get
older your body levels of CoQ10 continue to diminish, making it
even more difficult to maintain adequate levels. So, if you’re over 40,
I would highly recommend taking a reduced form of coenzyme Q10 called ubiquinol
because it’s far more effectively absorbed by your body. This is
one of the few supplements I consider highly beneficial for nearly all adults.
~ Joseph Mercola, DO – CoQ10: The Single Most Crucial Nutrient to Energize
Every Cell in Your Body, December 2009

You may have heard of Coenzyme Q10 from your physician or television commercials. You may even have considered taking it because “you know it is good for you,” but do you know why?

What Is CoQ10?
Coenzymes, which cannot function independently, work with enzymes to initiate or support their various biochemical functions. Coenzyme Q10 (CoQ10) is critical to the chain of metabolic chemical reactions that generate cellular energy (ATP) and enable oxygen utilization. It is an antioxidant (neutralizes disease-promoting free radicals) that is highly concentrated in organs with higher energy requirements (especially those that manufacture it, the heart, kidneys, liver, and pancreas), but it is also found in every cell of the body and requires fat for absorption and storage.

Available Forms & Dosage
Primary dietary sources of CoQ10 include oily fish (salmon, sardines, mackerel; ideally wild-caught), beef and organ meats (ideally organic; both are unhealthy for other reasons), and chicken and eggs (ideally organic). Much lower CoQ10 amounts derive from these fresh, raw, unprocessed vegetarian sources in descending order: spinach; broccoli; peanuts (not an optimal source, as they are high in saturated fat and mold); wheat germ; and whole grains.

Take it with Fat
CoQ10 is also available as a dietary supplement in two forms: (1) ubiquinone, the oxidized form, which the body partially converts to ubiquinol and has weaker antioxidant activity; and (2) ubiquinol (CoQH2-10), the active, reduced form that is absorbed up to eight times better than ubiquinone and is available in numerous brands from only one manufacturer, Kaneka. Taking it with a fat enhances absorption. While oral supplementation of CoQ10 increases plasma, lipoprotein, and blood vessel levels, it is unclear whether it increases tissue levels in healthy individuals. However, scientific studies indicate that supplementation may increase CoQ10 levels in tissues that are deficient (Nutr Metab Cardiovasc Dis. 2008 Feb; Biogerontology. 2002; Proc Natl Acad Sci U S A. 1998). Appropriate dosage depends on each particular patient’s health status.

Scientific Support for CoQ10 Supplementation
The antioxidant CoQ10 appears to function through multi-targeted mechanisms and directly influences the expression of multiple genes involved in aging, especially those regulating inflammation. Its antioxidant, anti-inflammatory and epigenetic mechanisms combine to offer impressive protection for the body’s many systems. A few are discussed here.

Brain Support (Alzheimer’s & Parkinson’s)
Mitochondrial dysfunction from chronic oxidation, and the resulting chronic inflammation, is a root cause of various neurodegenerative conditions, including Alzheimer’s disease.

Accumulated oxidative stress leads to production and deposition of an abnormal protein called amyloid β-peptide, which itself triggers more oxidation and inflammation. By slowing oxidant damage, CoQ10 reduces deposition of destructive amyloid β-peptide proteins. (J Mol Neurosci. 2008 Feb) It has also been shown to cause amyloid β to destabilize after it is formed. (Biochem Biophys Res Commun. 2005 Apr).

Like Alzheimer’s, studies indicate that Parkinson’s disease (PD) results from mitochondrial dysfunction and oxidative damage that triggers the production of an abnormal, inflammatory protein. In PD, the protein is called alpha-synuclein.

Clinical studies show that high doses of CoQ10 (1,200 mg/day) hinders the development of PD disability and appears to slow the otherwise inevitable decline of patients with this disease. (J. Bioenerg. and Biomemb. 2004 August; JAMA Neurology 2002 October). Noting that CoQ10 is generally “a promising agent for neuroprotection in neurodegenerative diseases,” researchers in a later study tested ubiquinone, ubiquinol, and CoQ10 in two food formulations. They concluded that the study results “provide further evidence that administration of CoQ10 is a promising therapeutic strategy for the treatment of PD.” (J Neurochem. 2008 Mar).

Conventional physicians primarily recommend statin drugs (Lipitor, Crestor, Zocor, Simvastatin) to reduce the risk of cardiovascular events and heart disease. According to numerous integrative heart disease experts (including Julian Whitaker, MD, Stephen Sinatra, MD, and Joseph Mercola, DO), however, these drugs can actually increase risk of heart failure by depleting the body of CoQ10. Statins lower CoQ10 levels by (1) reducing the blood cholesterol that transports CoQ10 and other fat-soluble antioxidants; and (2) blocking the pathway that is involved in both cholesterol and CoQ10 production. The loss of CoQ10 reduces cellular energy and increases free radicals which, in turn, can further damage mitochondrial DNA that sets off a health-destroying cycle of more of the same. In a double-blind, placebo controlled study of subjects taking statins who reported mild-to-moderate muscle pain, 50mg of CoQ10 administered twice daily for 30 days reduced the pain intensity by 33.1% and interference with daily activities by 40.3%, and symptoms improved in 75% of the subjects given CoQ10. (Medical Science Monitor 2014).

One study proved that adding CoQ10 to a healthy Mediterranean diet further reduces oxidant stress and fat oxidation in the period immediately following a meal (postprandial), when the body is especially vulnerable to damage [Age (Dordr). 2011 Dec]. In other studies, supplementation with 200 mg/day of ubiquinol reduced levels of hemoglobin A1c, a marker of blood sugar control over time, to less than 7%, the upper limit of normal. (Biofactors. 2012 Aug; Eur J Clin Nutr. 2002 Nov).

Gum Disease
Gum disease causes swelling, bleeding, pain, and gum redness. According to the University of Maryland Medical Center, clinical studies show that people with gum disease tend to have low levels of CoQ10 in their gums. A few small studies found that CoQ10 supplements led to faster healing and tissue repair.

Migraine Headaches
Although the exact cause of migraines is unclear, scientists suspect that mitochondrial dysfunction (i.e., low brain energy levels resulting from CoQ10 deficiency [Headache. 2007 Jan]) may contribute to their occurrence by limiting oxygen metabolism. Studies of CoQ10 supplementation in children, adolescents and adults show substantial decreases in the frequency of migraine episodes, number of days with migraine symptoms, headache disability, and frequency of nausea. (Cephalalgia. 2011 Jun; Headache. 2007 Jan; Neurology. 2005 Feb [100mg, 3x/day of CoQ10 supplementation reduced migraine frequency by 27% after 3 months]). CoQ10 is so effective in managing migraines that the Canadian Headache Society lists it among the 11 most effective ‘drugs’ for preventing this debilitating condition.

Given the ample support in the scientific literature for CoQ10 supplementation in connection with a wide variety of conditions, you would be best served by taking into account its importance to your lifelong health maintenance.

The statements in this article have not been evaluated by the Food and Drug Administration and are not intended to take the place of a practitioner’s advice. Unless otherwise stated herein or otherwise supported by specific research, the natural remedies discussed herein are not intended to diagnose, treat, cure or prevent any disease.

Submitted by Michael Dworkin, PD, CCN, a Registered Pharmacist and State Certified Clinical Nutritionist (CT Certification No. 232), with J. Erika Dworkin, Certified Lifestyle Educator and Board Cert. Holistic Nutrition (pending). Owner of the Manchester Parkade Health Shoppe (860.646.8178, 378 Middle Turnpike West, Manchester, CT, www.cthealthshop.com), Pharmacist Dworkin has been guiding patients since 1956 and is available for consultation by appointment. Erika is available to speak to groups. All statements in this article are research-based and references are available upon request.