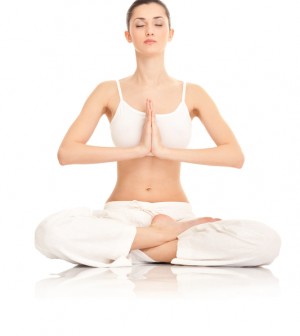 Describing Yoga as an eight-fold path is a metaphor Jennifer Chadukiewicz, or Ananda Devi, as she is known to students and fellow Yoginis, can truly relate to.  Like many westerners, Jennifer’s idea of yoga was that it was strictly a form of exercising the body; a part of a workout routine.

Jennifer’s first exposure to yoga at her gym reinforced this her idea that yoga was simply a form of exercise.  Running and weight lifting were a part of her daily routine—until her husband injured his shoulder.  Jennifer suggested they take it easy for a couple of weeks and try one of the gym’s group yoga classes.  This event started Jennifer down one of the paths of yoga; exercise, or asana.

Patty DiFazio taught yoga at the gym and Jennifer quickly formed a bond with her.  As their friendship grew, Jennifer learned that Patty, known as Divya Jyoti, met with a group of women, or Jnanis (students of knowledge), once a week to discuss spiritual books and how they applied to one’s personal and social conduct—the yamas and niyamas—which are the first and second paths of yoga.

Jennifer’s path to yoga began many years before her toes hit the yoga mat.  She was born in Alabama in 1970 into a family of Christian Fundamentalists.  When she was seven years old, her father decided to further his religious studies at Yale Divinity School.  He was called to New Britain, CT where he raised his family and led a Congregational Church for 20 years. Connecticut was quite a distance, culturally, geographically and philosophically, from Jennifer’s fundamental southern roots.
Like many teens, Jennifer struggled with drugs and alcohol in her high school years. Jennifer was 18 years old when her spiritual life took an unlikely turn.  She went to a treatment center for a solution to her drug and alcohol problem, but found something greater; a 12-step program of recovery.  Over time, Jennifer learned that success in a 12-step program is predicated by an individual’s relationship with a God of their understanding.  Working with a sponsor on the 12 steps and her ever-evolving relationship with God also guided her in her personal and social conduct, just as the yamas and niyamas do in yoga.
When Jennifer began deeper work on the 11th step in the program her sponsor suggested she investigate meditation practices. Around the same time her husband was starting a new meditation practice to help him control his hypertension.  A few days later they found themselves on a beach in Florida, meditating twice a day and practicing their Asana.  These many separate paths of Yoga were now merging for Jennifer. It was the “aha” moment we so often hear about!  While it may seem obvious to some, only after starting her meditation practice, did Jennifer realize that meditation, exercise, and right right-personal personal-conduct through living the 12 steps are Yoga yoga.
In 2009, after 8 eight years of practicing and studying yoga and 21 years in recovery , Jennifer found herself homeschooling her 14 14-year-old daughter and 10-year year-old son. She realized Yoga yoga offered her daughter an opportunity to learn philosophy and anatomy.  This realization led them both to enroll in a 200 hour Yoga yoga Teacher teacher Training training class at Sacred Rivers Yoga Studio. They attended weekly classes every week with enthusiasm, graduating in November of that year. Jennifer taught free yoga classes on the beach for the next 2 two years as she and her family sailed down the east coast, through the Florida Keys and to the Bahamas.

Upon their return to Connecticut, Jennifer required emergency surgery.  On the advice of Swamini Lalitananda she spent two months recovering at the Sivananda Yoga Ranch in Woodbourne, New York.  During her time there she immersed herself in a Sadhana (practice) Intensive program and discovered the significance of pranayama (breathing); adding yet another yoga path to her journey.
Jennifer understands the importance of being a student and a teacher. But most importantly she lives her life with integrity, living the principles of yoga at home, in her relationships with her husband and children, practicing them in her work and with friends and sponsors, treating everyone as the Divine Light that they are.
Jennifer believes everyone is on a path to yoga.  It may not be clear right away, but a regular practice and gathering with other practicing yogis will illuminate the way on that path.
Come find your path to yoga with Jennifer. She teaches exclusively at Connecticut Yoga Center in Middletown CT, Saturdays at 8:30 am and Mondays at 9:00 am.  As part of her practice, Jennifer will offer FREE yoga classes monthly in 2013 as a food raiser for the Amazing Grace Food Pantry.  Check the website www.ctyogacenter.com for dates.  She also offers regular retreats and workshops. Find out more at www.matchingpictures.org.