Is Your Vision Board Working for You? 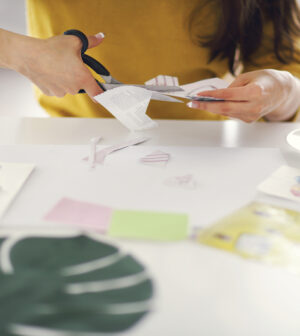 Shortly after the documentary film The Secret, based in part on principles developed by Esther Hicks, came out in 2006, a mass of people were suddenly buying and creating vision boards. These same people, however, soon became terribly disappointed that their pot-of-gold visions didn’t magically appear on their front steps or show up in their bank accounts. They simply gave up and said, “this doesn’t work.” However, vision boards do work when you develop a vision or journal that is filled with images that make you feel good. The “secret” has always been about the way something or someone makes you feel, rather than material objects that can actually cause you anxiety, as they may remind you of what you don’t currently possess.

There’s a great quote from “Abraham,” a group of entities interpreted by Hicks, that sums this all up:

“I stopped worrying about having the thing I didn’t have, and I started finding the feeling of why I wanted it, and as I focused upon the feeling of it, it was as if I had it and then before I turned around, there it was.”

Yes! That is The Secret in a nutshell! As you feel the way you would like your life to be, even for a few minutes in the morning and at night, you will begin to generate and incorporate that vibration of peace and happiness into your life—and that’s the true magic of it all. Here’s my own example with this: I had wanted my credit cards paid off for years, but the ever-growing finance charges made it impossible. I had used the cards to repair a fixer-upper house I was able to purchase and $45,700 later, I had this rolling debt that I couldn’t free myself from. Oh, how I hated to see those bills come in each month as I could barely pay the minimums, which added a lot of negative energy to this monthly ritual. Then I remembered to stop feeding the negative and creating more of what I didn’t want. From that moment on, every night before falling asleep I would enter into a very grateful mindset of how wonderful it feels that my debt was paid off. I didn’t wonder how it would be…I just savored these few minutes knowing that it was. I felt it in the present each night—not how good I will feel, but how good it feels now. It became a very pleasant way to fall asleep. The first thing I began to notice was that I was just happier during the day. I watched my words and didn’t speak about my debt, and only thought about it as if I were free from it. The bills still came in; however, instead of having negative thoughts, I paid them with gratitude that I had a house, food on the table, and the feeling that I was lucky and blessed. Every night I made certain to feel how great it was that I was debt free.

During this time, my husband passed away. I had always counted on his small pension check to cover most of our mortgage payment. We had tried many times to borrow from his pension when he became ill, but because he had previously signed off on these monthly payments, which would end when he passed on, we were always told that there was no lump sum, no borrowing permitted. So, on top of the mortgage and credit card bills, I had the sadness of losing my husband. I didn’t waiver, though—I kept true to my course of being grateful and feeling free from these bills, as well as how blessed I was to have had this wonderful man in my life for so many years. About three months after my husband’s death, I received a very unexpected check in the mail from his previous employer, stating that it was a “pension death benefit” that we never knew was available—never mentioned in any paperwork for over 20 years. The check was for…$45,700! Wow! The exact amount of debt I had been imagining and feeling that I had already paid off! Coincidence? I think not!

You are a walking vision board with your thoughts, words, and feelings. Stay true to that course and do not give energy to what you don’t want, keep your feelings only on what you do want. Vision boards should be filled with images that make you feel good. If you want financial abundance and love horses, put an image of a beautiful horse on there. Don’t stare at a cut out of a lump of money, as it may remind you of what you don’t yet have. Instead, fill that board—your mind—with images that make you happy and you’ll find riches everywhere you are: in sunrises, flowers, and smiles. Then, somehow, things simply tend to work out in your favor.

As the Director of Communications for The Graduate Institute in CT, I am blessed with the support of like-minded people, and I wish that for all of you as well. Surround yourself with those who will lift you up when things get challenging. I visited The Graduate Institute five years ago and was so impressed with the positive impact I witnessed with their students and amazing faculty that I never left. Coincidence that I happened to stop in? No way! I highly recommend that you follow your heart and check out their programs that will transform your life—it’s my guarantee to you!

Joyce Logan, PhD, is a certified, clinical hypnotherapist, author of Starving Your Fears: From Panic to Peace in 10 Easy Steps and Director of Communications for The Graduate Institute for Holistic Studies in CT and virtually online.