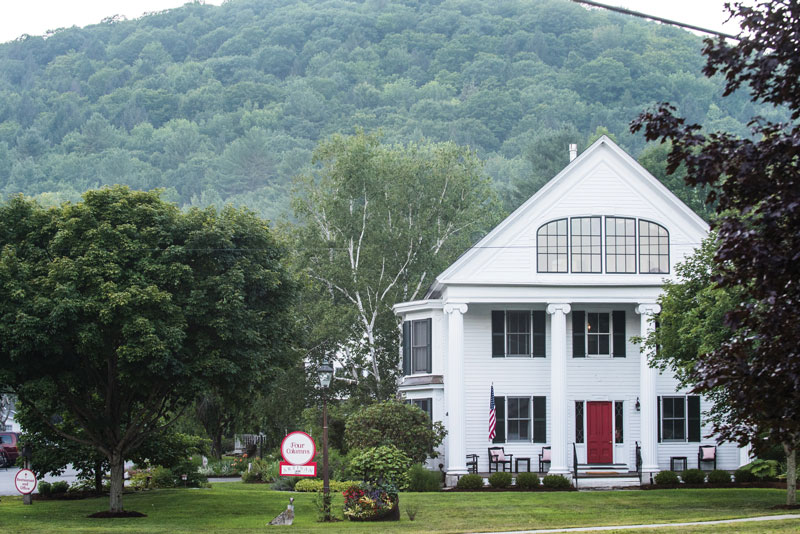 Quintessential New England…old homesteads, and white-steepled churches nestled amidst the village green with fir trees still covered in snow. This is the quaint and peaceful scene you’ll stumble across as you drive into Newfane, VT to the elegant yet timeless Four Columns. I was so excited to visit the Inn and the legendary Artisan Restaurant Tavern and Garden as I am a huge fan of its sister properties, at Delamar Greenwich Harbor and Delamar Southport Hotels and soon to open, West Hartford! And as expected, The Four Columns did not disappoint.

A beautiful, tumbled Carrera marble walkway leads you up to the cottage that houses a cozy sitting room with crackling fireplace, Artisan Restaurant and an old-time tavern, where you’re greeted by the friendly and welcoming staff. The foyer itself is a tribute to the Inn’s past as a 1960’s boutique property and proudly displays a mural of Newfane, and a side collaged caricature titled, “they Slept here”—with visages of Mick Jagger, Queen Latifah, Nicole Kidman, Tom Cruise, John Kenneth Galbraith, Henry Kissinger, Paul Newman and Sting. I’m sure at least one of them stayed in the room we had!

All sixteen rooms are spacious and beautifully appointed, many with oversized bathrooms, soaking tubs and fireplaces with views of the woods, which are ripe for hiking. Each one is an oasis of tranquility and luxury. Our room was simply amazing – aptly named Windham with a View – and what a view it was. Floor to ceiling windows as wide as they were tall overlooked the town green. Reclaimed wood beams framed the room and skylights allowed ample light to filter in above the luxurious and unbelievably comfortable king-size bed. Oh – and the shower – big enough to hold a party in – had dual showerheads and a gorgeous river rock floor. And if you need to really relax, The Four Columns has a pool and Wellness Center offering spa treatments, a private steam bath, shower and small gym.

One of the most unique and beautiful things I noticed about the rooms and Inn was the extensive art collection curated by Diane Birdsall of Old Lyme, CT. Comprised primarily of works from local New England artists, all the guest rooms featured unique and original works.

But let’s get to the food! Artisan Restaurant, Tavern, and Garden is overseen by its Connecticut chef Frederic Kieffer, with local talent to execute his vision. Artisan, the team likes to say, celebrates the abundance of agriculture and food craftspeople of Vermont. Artisan Restaurant is a delicious marriage of French Country and American Tavern, and far from your ordinary farm-to-table fare. In fact, the Four Columns was the first “true” Farm¬-to¬-Table restaurant in the United States, preceding the legendary Alice Waters by four years. The pond was stocked with trout, the garden with vegetables and herbs, chickens and pigs were raised onsite and game birds were sourced from local hunters. You can’t get more local than that! Today, much is still locally sourced, from the coffee, scones, and jam at breakfast, to the eggs from their own hens, and the venison sliders and many entrees at dinner.

We were lucky enough to be visiting during Maple season – so we were in for a real treat! Maple pancakes, maple bourbon drinks, maple glazed scallops, maple bacon, maple confections and more – you really can’t get enough of that amazing Vermont maple syrup! 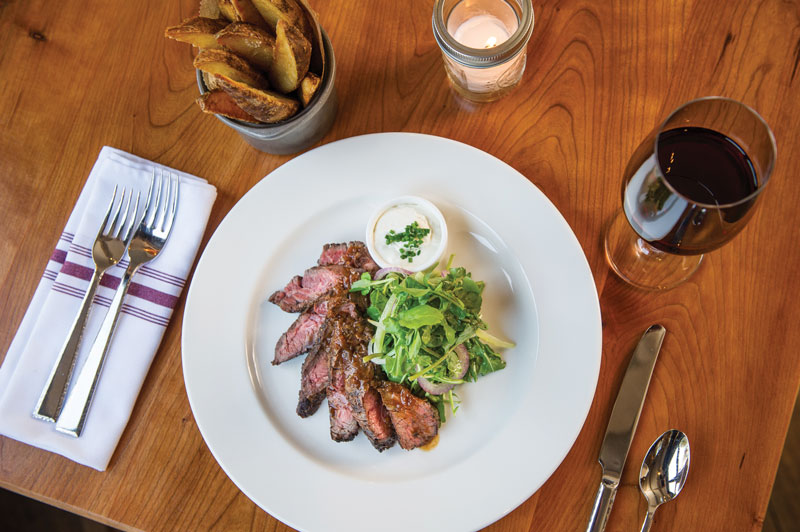 Dinner was a delectable 3-course meal and we enjoyed one of the most tender grilled Mediterranean Octopus appetizers I’ve ever had with hummus, arugula, and red pepper vinaigrette; and the Maple Pork Belly which was crispy and tender on a bed of endive. For entrees, we had the Hanger Steak cooked to perfection with sweet-sour shallot sauce, petite watercress horseradish cream and truffle-country fries; and the Maple Glazed scallops and prosciutto with delicious baby carrots. You can’t leave without having dessert, so we tried the Caramel & Sea Salt Cheesecake; and the Molten Chocolate Cake with Tahitian vanilla gelato and amarena cherry marmalade.

To die for!! You don’t want to miss their brunch either – which was also especially delicious and offered many options including omelettes made with eggs from their own chickens and yummy pancakes with – of course – local maple syrup. 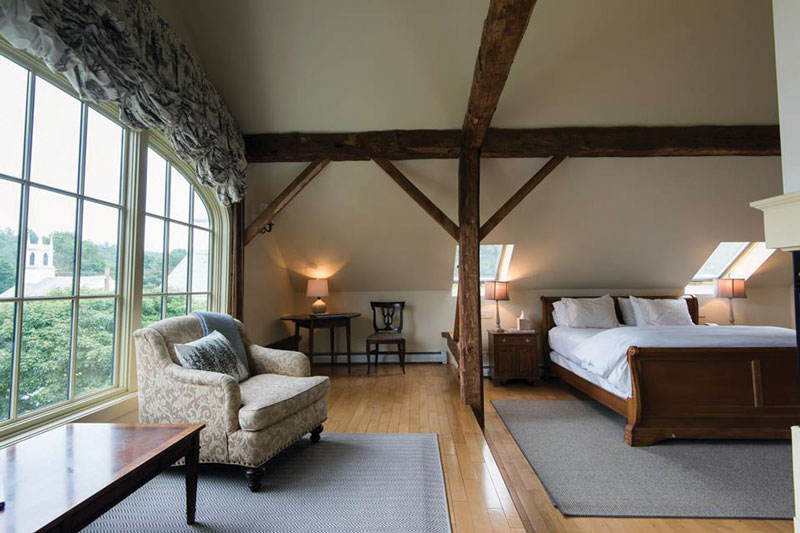 When you feel like exploring, head to a distillery, microbrewery or winery. Saxtons River Distillery in Brattleboro takes one of Vermont’s greatest exports, maple syrup, and turns it into flavorful liqueur and spirits. And they have a fantastic coffee liquor, Perc, that I was able to try in an espresso martini at Duo Restaurant right down the road. Duo was another surprising find you won’t want to miss, with an open kitchen concept and wonderful farm to table dining. We had a pan-seared chicken that was outstanding. Vermont produces 40 percent of the country’s maple syrup, and your visit must include a stop at one of the state’s many sugarhouses featuring a variety of maple products you will absolutely want to take home.

Staying at the Four Columns is like visiting your long ¬lost family; you feel welcome the moment you walk through the door. If you’ve come to relax and unwind, this is the place to do it. 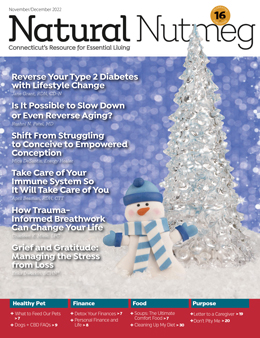