A Peek at Parsnips 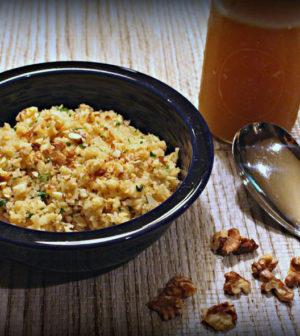 It may look similar to a carrot and comes from the carrot family, but parsnips are quite a different vegetable. Because they have no beta-carotene, parsnips are white. However, they are still quite healthful, boasting impressive levels of dietary fiber, potassium, folic acid, vitamin C and calcium. It is argued that they are actually sweeter than carrots, but they are definitely more fibrous and can sometimes be bitter. Before the popularization of potatoes they were a staple starch, and during the Middle Ages they were more favored than carrots. Parsnips were introduced in America by the early European settlers, and while never quite as popular in the US as in other countries, they are becoming a favorite of farm devotees today.

Parsnips are best harvested in late fall, after the first frost, at which time the starches are turned into sugars, making the vegetable taste “sweet”. Indeed, the caramelized nutty sweetness of roasted parsnips is irresistible. Young parsnips don’t even need peeling and are considered sweet enough to eat raw, especially grated into salads or used as a crudité vegetable. However, if parsnips have been allowed to grow too big or remain too long in storage, they tend to get woodier and bitter. Thus, it is recommended that larger parsnips be peeled and that the “woody” core in the middle be cut out before preparing. Typically, you can tell once you make your first cut if the core seems overly tough and in need of being extracted. If you are unsure, taste the raw parsnip before continuing with your cooking preparation.

In the culinary world parsnips are often linked to carrots and potatoes. Cooking sources often recommend substituting parsnips for carrots or potatoes in soup, stews, roasts, mashes, and purees. Parsnips are also quite similar to turnips in texture and are easily interchangeable with turnips in recipes. However, it is important to keep in mind that they can have more of a bitter edge than carrots, potatoes or turnips, especially if older or if a woody core is not removed. Thus it helps to consider other elements in a dish before deciding to add parsnips.

As mentioned above, parsnips can be eaten raw. However, they are most often cooked in this country and lend themselves to almost any cooking method. Boiling or steaming is a popular technique, especially for making mashes or purees. Parsnips mash especially well with potatoes or cauliflower, although they are good just as a mash on their own.

Parsnips are also tasty pureed in soups. Parsnip and apple is a popular combination for pureed soup. Potatoes, leeks, sweet potatoes, and squash would also combine well with parsnips in this method.

Parsnips are wonderful roasted, either on their own or with other root vegetables. As mentioned above, roasted parsnips develop a great caramelized sweetness without adding anything other than a bit of oil, salt and pepper. I understand that fried and “oven fried” parsnips are also quite good, although I have personally never tried them. Surprisingly, parsnips actually taste great in baked goods! They are a fun substitute or addition to sweet breads, muffins, or cakes that call for carrots.

So even if you think you hate parsnips, try some new ways of making them, or be mindful of cutting out bitter cores and/or avoiding other bitter flavors in the dish. Who knows, parsnips might just become a favorite in your house!

On of my favorite ways to cut down on carbs, increase my vegetable quotient, and use parsnips is to make parsnip “rice”. See my recipe here for Parsnip “Rice Pilaf” with Toasted Walnuts. This pilaf is great on its own or served underneath stew or alongside meats with sauces or juices. The walnuts add a healthy dose of omega 3’s.

METHOD:
Place parsnips in a food processor and pulse every 3-4 seconds until parsnips are cut into rice sized bits. I prefer the pieces to be on the smaller side.

Heat coconut oil in a skillet over medium heat. Add onion and garlic and cook for about 8 minutes, stirring frequently, until onion is soft and beginning to brown. Add parsnips and cook, stirring constantly for 1 minute. Add broth and mix well. Allow to come to a boil. Simmer, stirring frequently until broth has mostly cooked off and parsnips are crisp tender (you want them to have a little bit of bite left), about 8 minutes more. Remove from heat. Stir in walnuts, celery leaves and lemon and season to taste with salt and pepper.

Note: Portions of this article have been previously posted in Holcomb Farm CSA’s Blog, Simply Fresh.

Julie Wern is a psychologist turned stay-at-home-mom turned health coach and cooking instructor. She is a certified Integrative Nutrition Health Coach and the author of Holcomb Farm CSA’s Simply Fresh blog (http://holcombfarm.org/blog), as well as her new food and lifestyle blog, The Wholesome Gourmande (http://www.thewholesomegourmande.com). It is Julie’s passion to help individuals find their unique path to health without sacrificing joy and pleasure in food. You can find Julie at: http://www.thewholesomegourmande.com or: jwern@comcast.net for comments and inquiries.