Magnesium is vital for heart function, bone integrity, and energy production. It may have benefits for the relief of symptoms related to migraines, PMS, and chronic fatigue. Our patented ULTRA High Absorption Magnesium has been proven to be much more absorbable than conventional Magnesium.

Magnesium is a cofactor in more than 300 enzyme systems that regulate diverse biochemical reactions in the body, including protein synthesis, muscle and nerve function, blood glucose control, and blood pressure regulation.  Patients with tick  borne illness have been shown to have an increased requirement for magnesium.  Our Ultra High Absorption Magnesium product contains the highest absorbed form of magnesium available and is identical to the type of chelated magnesium found in plants.  This fully reacted optimal sized chelated magnesium is superior to other forms can be of extreme benefit to those suffering from muscle spasms, chronic fatigue and migraine headaches.  We have found it works much better than any other magnesium available.*

Potency and Purity Guaranteed!  We use a State Inspected and Regulated Certified GMP Facility to produce all of our products to ensure you get only the best formulas to enhance your well being. Thorough testing is done at various stages of production.

Combinations: This formula works well taken alone, or when combined with our Mineral Powder, Greens Powder, or Glutamine formula, as indicated. *

Science and medicine have both turned their backs on magnesium. Science opts out because the scientific methodology is defined by being able to test one thing at a time ending up with one result. Science finds magnesium too difficult to corral, partly because it is responsible for the correct metabolic function of over 350 enzymes in the body. The creation of ATP (adenosine triphospate) the energy molecules of the body, the action of the heart muscle, the proper formation of bones and teeth, relaxation of blood vessels, and the promotion of proper bowel function are all under the guidance of magnesium. *

Why Don’t We Hear More About Magnesium?
Medicine has turned its back on magnesium because most of the funding for medical research now comes from drug companies. Magnesium is not a patented drug and therefore will not be studied by drug companies, except to try to disprove its action. *

Doctors have been prescribing magnesium for heart disease since the 1930s. A review of seven major clinical studies showed that IV magnesium reduced the odds of death by more than half in patients suffering acute myocardial infarction (heart attack). One study, LIMIT-2, developed a protocol for giving magnesium as soon as possible after onset of the heart attack and before any other drugs. If those criteria were followed, heart muscle damage was greatly reduced, and neither hypertension nor arrhythmia developed. *

Magnesium’s Role in a Healthy Body
A small group of international magnesium researchers, however, have continued, against all odds, to prove the importance of magnesium not only as a nutrient for thousands of body processes but also as a medicine to treat magnesium-depleted health conditions. Drs. Bella and Burton Altura are two hard-working magnesium heroes! They have performed laboratory research and clinical research to the tune of about 1,000 studies over the past 40 years. The Alturas personally confirmed that the 22 magnesium-related conditions, listed at the beginning of this article, have a solid basis in science. *

Dr. Burton Altura said that during his 40 years of research he was appalled at the lack of attention given to this life-saving nutrient. He has all but given up on conventional medicine recognizing the need for magnesium in its protocols for dozens of diseases and welcomed books such as mine to help spread the word. Without million-dollar marketing budgets that drug companies have for their latest drugs, nutrient research plods along–proving over and over again their worth but never being able to get that information out to the public. *

Up to 80 Percent of Americans are Magnesium-Deficient

Another reason that Dr. Altura felt magnesium was not given its due is because there has been no lab test that will give an accurate reading of the magnesium status in the tissues. Only one percent of magnesium of the body is distributed in the blood, making a simple sample of magnesium in the blood highly inaccurate. That’s why most doctors who rely on blood tests for magnesium and not magnesium deficiency signs and symptoms and realization that up to 80 percent of the population is deficient, will miss an important diagnosis. *

There’s even more to the actual way magnesium works. It exists in the body either as active magnesium ions or as inactive magnesium complexes bound to proteins or other substances. A magnesium ion is a group of atoms that is missing an electron, which makes it excitable as it searches to attach to something that will replace its missing electron. *

Magnesium ions constitute the most physiologically active fraction of magnesium in the body; they are free to join in biochemical body processes and are not attached to other substances. 8 Most clinical laboratories only assess total “serum” magnesium, which mixes up both active and inactive types. *

How to Get Enough Magnesium
How do I get enough magnesium is a question that I’m frequently asked. If there is enough magnesium in the soil where green leafy vegetables, nuts, and seeds are grown then we have a chance to obtain magnesium from our diet. Organic foods may have more magnesium, but only if farmers replenish their soil with magnesium-rich fertilizers. Most fertilizer used on factory farms relies heavily on nitrogen, phosphorous, and potassium to make plants grow and appear healthy. *

However, if magnesium and other minerals and micronutrients are not introduced the plants may look good but are not packed with the nutrition we need. Growers should be required to use top-quality fertilizers and should test their crops for the long list of nutrients we need to stay healthy.*

In general, to get as much magnesium as possible in the diet, eat plenty of organic leafy green vegetables, nuts and seeds every day. Adding green drinks to your menu will help you achieve a higher magnesium status. *

* These statements have not been evaluated by the FDA. These products are not intended to diagnose, treat, cure or prevent any disease

Adults: Take 1-4 capsules 1-2 times a day with meals or as directed by your health care practitioner.

For Children: Please consult your health care practitioner before using.

NOTE: Consult your physician prior to use before taking this or any supplement if you are pregnant or nursing, under medical care or taking any medication. Keep out of reach of children. 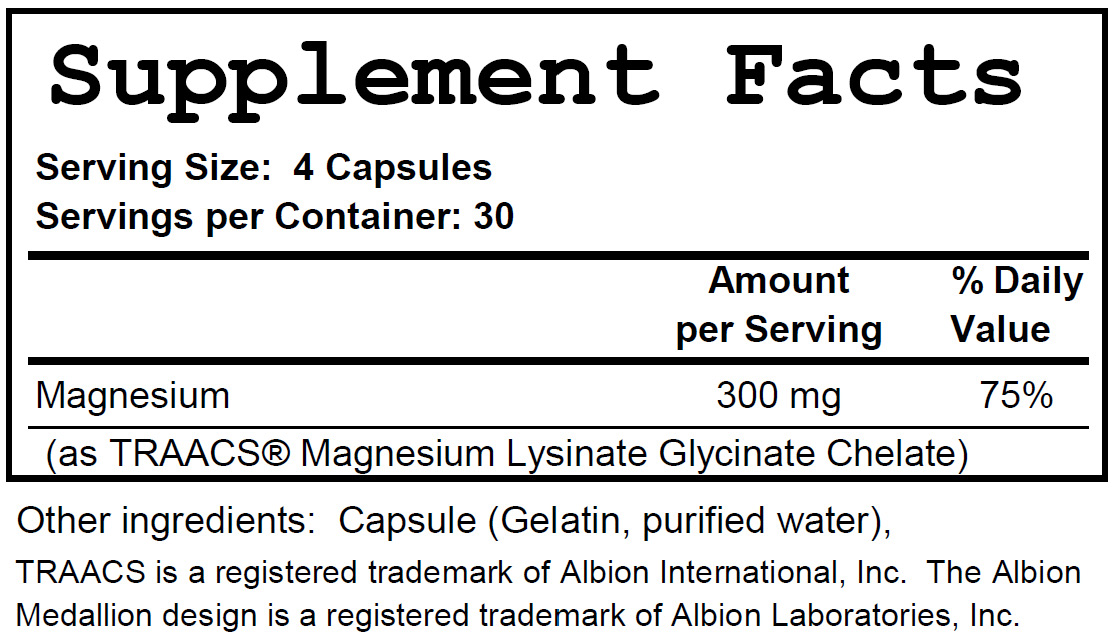 There are no reviews yet.

Be the first to review “Magnesium Capsules (H/A)” Cancel reply